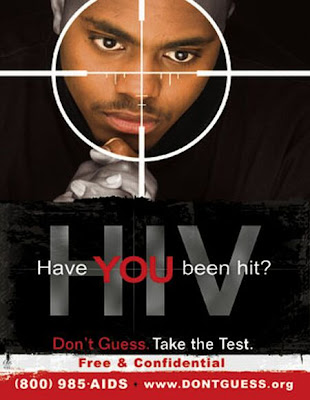 Human Rights Commission Debates Hostile HIV Prevention Ads
The Bay Area Reporter ran an insightful and well-rounded front-page article in the first week of 2007, all about promises from leaders of the HIV Prevention Planning Council, the SF health department and community groups to hold debates about needlessly offensive HIV/STD prevention ads.
The debate was supposed to address the hostility of the ads, like the one featuring a young black male in the cross hairs of a sniper's gun, and look at if they've been effective at reducing infections. As is the habit of AIDS Inc, the promise was broken and no debates have taken place and none are likely to happen any time soon.
But I recently went to the SF Human Rights Commission and its gay committee and asked them to address the tone, messages and effective of the ads, and I'm please to report the committee is looking at how to debate this issue.
The commission's gay committee earlier in May posted the minutes from the March meeting, where I raised my concerns about the some of the ads.
Here is the pertinent excerpt from those minutes:

5. Presentation by Michael Petrelis regarding DPH Viagra campaign discussion and possible action item:
Michael Petrelis said that he's been concerned about Dr. Jeffrey Klausner with the S.F. Department of Pubic Health's STD Control Unit for a number of years.
In 1999 a public health ad regarding syphilis described people with the disease as "walking, ticking time bombs," as dangerous things. He feels that this adds stigma to people with the disease and those who are at risk for contracting it, especially sex workers. He's afraid that this would create barriers for people with syphilis in receiving care.
He also referred to an article printed in The Washington Monthly in 2000 in which Dr. Klausner was quoted as saying that people with HIV and AIDS need to be quarantined, that club goers need to be tested for party drugs, and that sex establishments should be closed.
He points out that Dr. Klausner had supported a lawsuit against Pfizer, the manufacturer of Viagra.
Also in February 2007, the Bay Area Reporter printed an editorial in which they said that many gay activists have major issues with Dr. Klausner's repeated attempts to stigmatize gay men for leading irresponsible sex lives. Mr. Petrelis feels that this stigmatization drives people away from health care.
He would like to see the Commission weigh in on these proposals and ads and point out that it is not good public health to convey negative messages and images for sex related diseases.
He expressed his disappointment that others in the STD Control Unit, particularly LGBT people, did not attend tonight's meeting to talk about the thinking behind the ads.
Commissioner Chung said that Dr. Klausner was invited to attend tonight's meeting to respond, that he was unable to attend because he's currently out of town, but he sent an email with attachments explaining his position. She added that there are things we can/cannot do within our purview: we cannot tell another person or office how perform their job, but it is our responsibility to constructively articulate our concerns.
Mr. Petrelis entertained questions from the Committee.
Mr. Brinkin suggested that the Committee either take a more in-depth look at this subject or request that the Commissioners write a letter of concern to the Health Commission about the possible effects these ad campaigns have on one of their constituent communities. Ms. Ulrich asked that the Committee focus on the issue of stigmatization rather than the scientific facts of high-risk behavior and correlations of it.

Let's see how the debate goes forward at the Human Rights Commission. Of course, it would be fantastic if the HIV Prevention Planning Council got around to scheduling its long-promised debate on the ads, and even if both bodies are soon discussing HIV/STD prevention ads, we'll all have much to learn about how the ads are created and evaluated. Who could object to that?
Posted by Unknown at 3:22 PM
Email ThisBlogThis!Share to TwitterShare to FacebookShare to Pinterest
Labels: debates, HIV prevention ads

Interesting. Has anyone asked Dr. Klausner to describe what he would consider a "responsible" sex life?