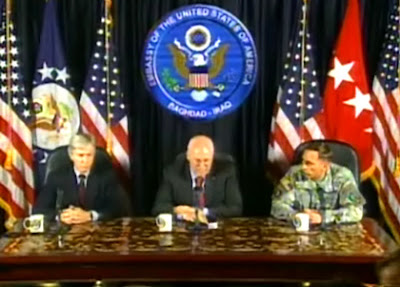 (Cheney speaking at his news briefing today in Iraq. The fuzziness of the image is present in the original source, from the Pentagon. Kind of like the fuzzy way in which Bush and Cheney view the war; out of focus and anything but crisp and clear.)

Believe it or not, there's some good news out of Iraq today. No, nothing on the order of peace miraculously breaking out or a reduction in sectarian violence and death or U.S. troops departing for home, but something small, yet significant.
An American reporter, Tom Raum of the Associated Press, apparently broke the ground rules at a press briefing with Vice President Dick Cheney. Seems the media were asked to not pose questions about benchmarks, but one journalist ignored the White House request.
From the White House web page for Cheney and his remarks:

THE VICE PRESIDENT: Well, obviously I've got General Dave Petraeus and our Ambassador Ryan Crocker with us. We spent most of the day together. It's been a good day. We met with virtually all the top Iraqi leaders. Might have missed one or two who were out of town, but we caught most of them, including Prime Minister Maliki and as well as President Talabani, Vice President Hashemi and al-Mehdi.

During the course of the meetings I emphasized the importance of making progress on the issues before us, not only on the security issues but also on the political issues that are pending before the Iraqi government. I was impressed with the commitment on the part of the Iraqis to succeed on these tasks, to work together to solve these issues.

I also met with their top military leadership. I think it's important for all of us to remember that the sacrifices that the Iraqis have made in this conflict have been substantial. I look forward tomorrow to have any opportunity to spend some time with our U.S. military forces.

And with that, we'd be happy to respond to questions. And the first question goes to Tom Raum.

QUESTION: Mr. Vice President, did you hear anything today that makes you believe that the benchmarks that have been set up are getting met any quicker than earlier? And if so, is there any possible (inaudible) tie the performance at meeting these benchmarks to getting funds from Congress, as some Democrats have suggested?

And General Petraeus, you said a few weeks ago in Washington that regardless of how things went, it would take an enormous commitment of time and effort on the part of the United States before things are stabilized. Do you still believe that?

THE VICE PRESIDENT: I'm not sure that was consistent with the rules, Tom, but what the heck. You got the first one, so we'll go with it.

With respect to the question of benchmarks, we still believe that it's important that funding for the supplemental for operations here in Iraq not contain conditions that limits either the flexibility of our commanders on the ground in Iraq or interferes with the President's constitutional prerogatives as Commander-in-Chief, which is the general principle that we've adhered to and it's one of the reasons the President vetoed the original bill.

I do sense today a - I think a greater awareness on the part of the Iraqi officials I talked to of the importance of their working together to resolve these issues in a timely fashion. I think they recognize that it's in their interest as well as in our interest that they make progress on the political front just as we deal with the security issues. [Emphasis added.]

Thank you, Tom Raum of the AP, for not bowing before Cheney and any pressure from his staff to keep the questions today light and easy. We could use a lot more reporters like you, willing to not abide by dictates from the White House during this time of war.
More from the briefing:

QUESTION: Thank you, Mr. Vice President. I'm wondering how you feel the security situation here is doing compared to the last time you were in Iraq, and if you can give any serious assurances to the American public that things will, in fact, get better anytime soon.

THE VICE PRESIDENT: Well, I have to rely on reports like everybody else does, obviously. I've spent today here basically in our embassy and the military headquarters in the green zone, so I can't speak from personal experience in terms of what's going on all across Iraq.

I can say that based on the conversations I've had today, and most of those conversations were with Iraqis and Iraqi leaders - some of them in the government, some of them not - that they believe the situation has gotten better. They cite specifically the statistics on sectarian violence, Sunni-on-Shia and Shia-on-Sunni violence that they think is down fairly dramatically.

I think everybody recognizes there still are serious security problems, security threats; no question about it.

But the impression I got from talking with them - and this includes their military as well as political leadership - is that they do believe we are making progress, but we've got a long way to go.

Um, Mr. Vice President, you're claiming you've heard the situation is improving and that progress is being made, but you were unable to see anything other than the U.S. Embassy compound and other places inside the Green Zone, so really, where's the improvement and progress and why were they enough for you to travel outside the safe security zones?

Click here to read the full briefing.
Posted by Unknown at 2:09 PM
Email ThisBlogThis!Share to TwitterShare to FacebookShare to Pinterest
Labels: AP reporter does his job, denial, Dick Cheney

Oh, here we go again...The liberal media refusing to honor the simplest request by the Vice President of the United States that they not pose questions he doesn't feel like answering. Or that make him sad. Or angry-feeling. Or that make him look like the evil, mendacious, ruthless swine that he is.

One thing's for sure, Tom Raum certainly won't be getting invited back. He would do well to remember that we all serve at the pleasure of the President.

Tom Raum rocks. We need more reporters asking real questions like this one.

'We all serve at the pleasure of the president..." ??? I sure don't. 'Serving' at the pleasure of this administration is what has got us into this quagmire. I'm a citizen. They are at least supposed to be 'public servants'. Given the recent dismal approval ratings, I'd say some folks, starting hopefully with Dick Cheney, should give that some thought.

Please help me understand. On the basis of what information do you conclude that the "rule" was, in essence, "Don't ask about benchmarks?" Is that in the transcript somewhere? If not, I think the much more likely possibility is that Raum broke a very common (and also commonly broken) rule that at a two-person press conference, you can't ask questions of each person (here, Cheney and the general).