Consider this hypothetical question: What if you're a terrorist intent on finding vulnerable spots in America's security nets, how would you go about finding those vulnerabilities?

One way would be to read the New York Times, which President George Bush and his administration maintain feeds information to evil-doers when the paper reports on programs like the National Security Agency's warrantless spying.

You might get a terrorist buddy a job at the Justice Department and have him access secret documents on the lack of information sharing between immigration officials and law enforcement agents.

Another way would be filing Freedom of Information Act requests with the Department of Homeland Security for records on the agency's screening efforts targeting air cargo shipments and airline passengers, and the effectiveness of the current screening processes, almost five years after 9/11.

But why go through any of those cumbersome steps when all you need do to learn about gaps in our security is visit the White House's "Expect More" web page. There, you'll learn exactly where the gaps are, with just a few mouse clicks.

"Automation Modernization Program [which eventually] will provide Immigration and Customs Enforcement with the necessary technology to communicate and share information within the agency and with its other law enforcement and immigration partners [...] The program has weak program and management structure and must dramatically improve its ability to manage its resources."

To be honest, I thought this program of integrated data sharing for ICE was already in place, but I was wrong and what is in place right now is so lame the White House wants dramatic improvements.

What's the status of the Transportation Security Administration's protection of cargo and passengers? We're okay on these matters, right? Guess again.

"TSA should improve improve [sic] methods to evaluate risks and vunerability [sic] in the air transportation system as it relates to air cargo. The program has recently developed interim long-term and annual measures to measure program effectiveness. However, due to data limitations, the program is unable to measure the risk reduced as a result of implementing program objectives. Work remains to close security loopholes, including improving screening efforts and refining procedures to approve indirect air carriers. The program has developed a strategic plan and is deploying a new security screening system, both of which are steps in the right direction."


Click here for the source of this sad news.

Don't fear, this is what the TSA is doing to implement more security in the air:

"Improving methods used to evaluate risks and vulnerability in the air transportation system through the 'Freight Assessment System.' TSA willl [sic] fully deploy this system in 2008."

Hmmm, more than a year away before that system is up and running. Doesn't exactly instill confidence in me. How about you?

Surely the TSA program screening our luggage must be doing a good job. Right?

"The Baggage Screening Technology program provides the technology necessary to prevent the entry of dangerous weapons, particularly explosives, on aircraft through inspection of checked baggage."

That's sounds very reassuring, until one reads about the problems with the technology and when the TSA expects better screening to be operational:

"The baggage screening technology architecture is sound, although questions exist regarding the efficiency of its current deployment within airports. The program now has strong performance measures, but targets are under development. The program has not yet undertaken an evaluation of sufficient scope and quality [...]

"[The TSA is] procuring and deploying approximately 125 Next Generation explosive detection machines by 2007."

Notice they say those new devices should be ready by 2007, but the issue of whether they'll be operational is not addressed. What's the rush anyway, all these years after the September 11 tragedy on our soil? It must be a priority for Bush administration officials.

Maybe the TSA's program for screening passengers and carry-on bags and preventing the introduction of guns and explosives on planes is meetings some stated goals? Nope, this technology program falls into the "Results Not Demonstrated" category:

"The assessment found that the Passenger Screening Technology program was unable to demonstrate outcome-based performance results. The program recently developed annual performance measures, but targets are under development. The program has not yet undertaken an evaluation of sufficient scope and quality. Work remains to develop long-term measures. TSA is in the process of implementing better management information systems so that performance oversight of technology contractors is improved."

When newspapers report on these failures in our security nets, Bush and his officials at the Department of Homeland Security accuse the publications of providing damaging information to the country's enemies. But when the same information appears on the White House site, with no apparent rush to close these security holes, it's not aiding and abetting our foes. How long will the White House post this data before the administration gets serious about protecting us?

Oh, one more small thing. Will someone please ask the White House to use spell-check and grammar-check for the Expect More site? 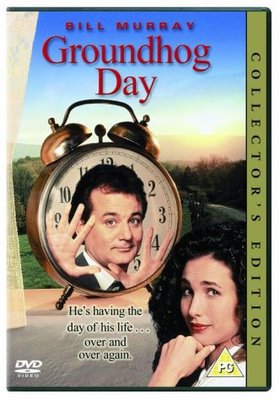 Vice President Dick Cheney traveled to Arizona last week in his official capacity as chief fundraiser and scaremongerer, and just for sating my curiosity, I took one troubling phrase from his speech and Googled it. Something about the phrase sounded terribly familiar.

Sure enough, Dick, Dick, Dick! has been using the exact quote, and same boring deadly talking points since at least February of this year:

June 23, 2006
REMARKS BY THE VICE PRESIDENT
AT A LUNCHEON FOR CONGRESSIONAL CANDIDATE DAVE MCSWEENEY
Hilton Chicago

"We can expect further acts of violence and destruction by the enemies of
freedom."

Mr. Vice President, in reminding Americans that we can expect the enemies of freedom to stay the course in waging attacks against us and each other in Iraq, do you honestly believe you are instilling confidence in your plan of action for the war over there?

Repeating the same deadly expectation this past year for hand-picked audiences is not leadership and you should start to level with us about precisely when we can pull our troops out of harm's way. Bring the troops home and you won't have to make the same speech anymore.

Posted by Unknown at 5:30 PM
Email ThisBlogThis!Share to TwitterShare to FacebookShare to Pinterest

"We can expect further acts of violence and destruction by the enemies of freedom."
I think perhaps Cheney is being totally honest here. He has proven time and again that he is no friend of freedom -- he seems to view it as a pesky nuisance, to be minimized then drowned along with Grover Norquist's Social Security. He is speaking of himself and his cabal when he writes of the enemies of freedom. I certainly expect him to perpetrate further acts of violence and destruction, and I find it refreshing to hear him speak so candidly about their plans.

Dick Cheney: "We can expect further acts of violence and destruction by the enemies of freedom."

Umm, these would include Dick Cheney and his buddies?

Well, Cheney's investment strategy is based on it. If buying US Bonds means you support the US, does putting your money on things going bad in the US mean you're rooting for the terrorists?