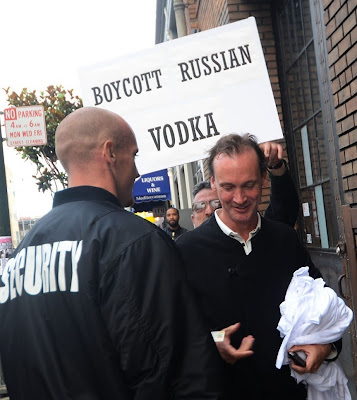 Ten activists from Gays Without Borders and the Facebook group Boycott Russian Vodka protested last night outside the Original Stoli Guy pageant at a gay bar in San Francisco's SOMA district. We were there because Stolichnaya is a Russian brand and not doing enough to support gay Russians and other reasons.

The Queerty site has partnered with Stoli to organize these pageants and has allowed huge Stoli ads on their site, while being generally dismissive of the boycott.

Queerty editor Chris Bull showed up with an armload of Stoli t-shirts and had to show his ID before being allowed into the BeatBox bar, which hosted the pageant. 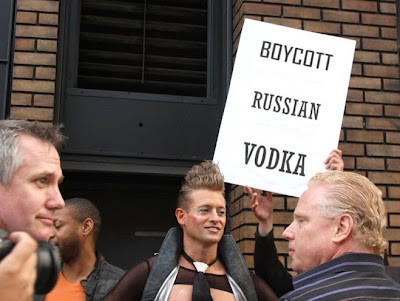 (This photo and all others below should be credited to Bill Wilson, Gays Without Borders.)

The gay ambassador for Stoli is Patrik Gallineaux, center with the pouffy hair and upturned collar, mingled with the crowd waiting to get in and say a few hellos to us protesters.

Mike Hoban, on the left in black t-shirt with back to camera, drove down from Sonoma County with a flyer explaining how Stolichnaya's parent company SPI Group is a Russian company and the importance of the Russian vodka boycott. Many folks took and read the flyer. 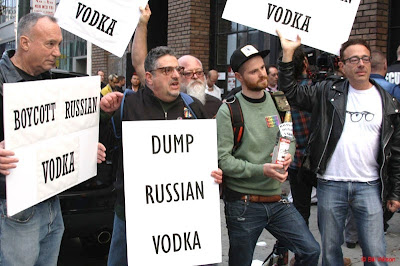 Before we dumped Stoli, a few of us protesters arranged ourselves for a group photo. From the left is Paul Barwick, yours truly, Mike Hoban, Robbie Sweeny and Alan Shaw. 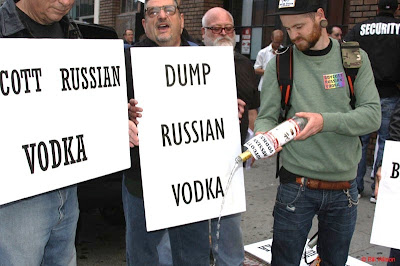 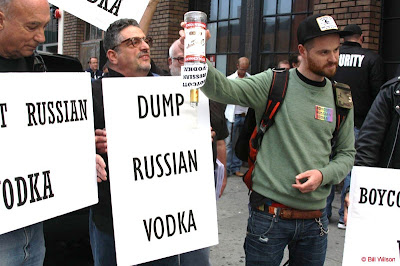 Once the bottle was empty, Sweeny held it upside down and encouraged everyone to like the Boycott Russian Vodka group at Facebook.

By the way, the popular 10 PM broadcast of the KTVU/Fox news ran two teasers about our action and the actual short story was part of a package of three LGBT Russian stories. The first was on the vodka dump, the second story was about gay U.S. track runner Nick Symmonds at a sports event in Moscow dedicating his medal to gay Russians, and the final piece reported that Bay Area cities are considering severing sister city pacts with Russian cities.

Thanks to everyone who showed up and participated in the action!

I knew Chris Bull when we both wrote for "The Advocate." He was a fierce fighter for LGBT rights back then.

Clearly he is no longer.