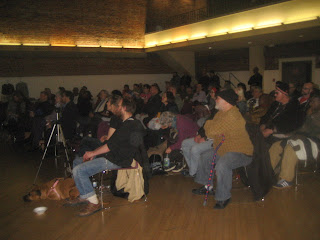 (The crowd at a meeting last week in SF for pot legalization.)

The cannabis caucus of the Harvey Milk LGBT Democratic Club a combination networking session and awards ceremony on December 10 at the Women's Building and a solid 100 people, and a few canines, were there over the 90-minutes I spent at the meeting.

I went to listen to plans for eventual legalization of marijuana in California, along with the anticipated partial alleviation of the state's budget shortfalls when pot is legal, and I was not disappointed.

Awards were presented to several folks, including gay Latino Supervisor David Campos, who spoke about his City Hall push to create a 13-member panel to map out better city policies regarding pot clubs and patients' needs.

Representing gay Italiano Assemblyman Tom Ammiano's office was Quentin Mecke, and he addressed the current need for uniformity among local law enforcement agencies and officials about cultivation, distribution and use of medical marijuana.

There were information tables from assorted pot advocacy orgs, the crowd skewed toward older folks, with a healthy sprinkling of under-30s, gays and straights and in-betweens, and it was racially mixed.

Free marijuana was not distributed. This crowd was there to continue the work started in the 1970s by Harvey Milk and others, that led to passage of Prop 215 in 1996, and has given us affordable, good quality medical pot, and to finish the job with full and unapologetic legalization.

Fast forward to yesterday, and the good news about we're getting closer to the ballot in 2010 with the legalization attempt by voter-approval. From the Bay Guardian:

Californians may vote next year on whether to legalize marijuana. Proponents for the initiative that is primarily being bankrolled by Oaksterdam University founder Richard Lee today reportedly confirmed that they have more than enough signatures to qualify for the November 2010 ballot.

If approved by voters and not blocked by the courts or federal government, the measure would allow California cities and counties to adopt their own laws for regulating and taxing marijuana, even for purely recreational use. Polls have consistently shown that a majority of Californians support legalizing weed.

"It was so easy to get them," Lee told the Los Angeles Times, referring to the 680,000 signatures that he says they have collected, clearing the 434,000 threshold needed to qualify. "People were so eager to sign." [...]

Keep your fingers crossed enough valid signatures were turned in and that we go back to the voters in 2010 and win our dream -- legalization of marijuana. Check out more of my pics: 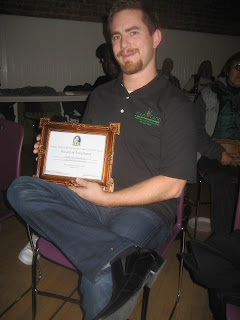 He received an award for Medi-Cann, an org that provides low-cost consultations to poor patients. 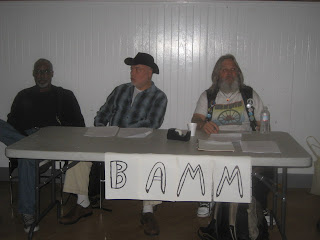 A few mature hippies at one of the info tables. 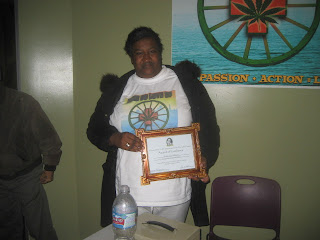 This woman was honored for her work with Compassion Behind Bars. I was shocked to learned her org miraculously provides ten non-violent offenders incarcerated in state prison, who are are all persons with HIV/AIDS, with medical cannabis. I cried when she cried, thanking the crowd. 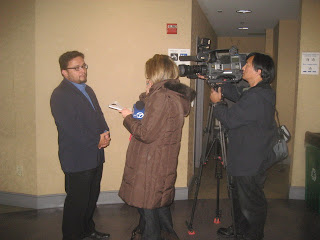 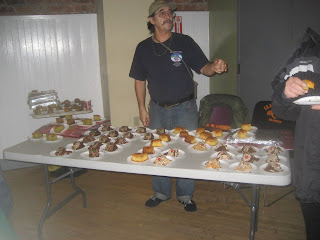 Yeah, dude. What would, um, a pot meeting be, without the munchies' table?
Posted by Unknown at 5:21 PM
Email ThisBlogThis!Share to TwitterShare to FacebookShare to Pinterest