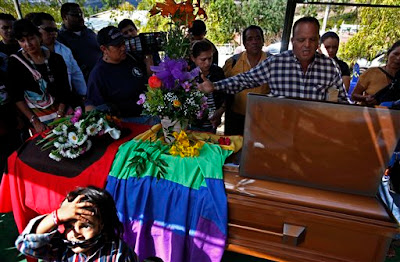 (The rainbow flag, an international symbol of gay diversity and solidarity, drapes the coffin of Walter Trochez, who was buried with the flag on December 15. Photo credit: AP/Estaban Felix.)
Earlier this week veteran gay journalist Doug Ireland broke the tragic story of the death of a young gay democracy fighter in Central America:

Walter Trochez, 25 years old, a well-known LGBT activist in Honduras who was an active member of the National Resistance Front against the coup d'etat there, was assassinated on the evening of December 13, shot dead by drive-by killers. Trochez, who had already been arrested and beaten for his sexual orientation after participating in a march against the coup, had been very active recently in documenting and publicizing homophobic killings and crimes committed by the forces behind the coup, which is believed to have been the motive for his murder. He had been trailed for weeks before his murder by thugs believed to be members of the state security forces. [...]

The assassination of Trochez has garnered much attention around the globe from gays and human rights advocates. So far, no reports have surfaced of any arrests made by the local police for his death. Several non-governmental organizations are calling for a full and impartial investigation into Trochez's murder. 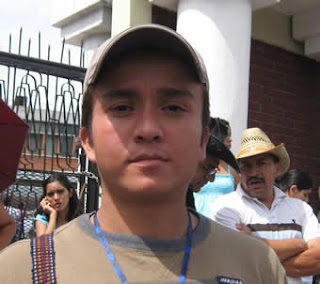 (Walter Trochez)
Amnesty International quickly issued a statement about Trochez's assassination and the org's talk with him before he was murdered:

According to sources, Walter Trochez was shot in the chest by a drive-by gunman and taken to hospital where he later died. Amnesty International said it fears that he may have been targeted because of his human rights work.

Walter Trochez told Amnesty International on Friday that he had escaped a kidnapping attempt on 4 December after suffering several hours of beatings and threats by masked men. They had interrogated Walter Trochez about individuals opposed to the de facto authorities who seized power following the 28 June coup d'état.

May Walter Trochez rest in peace and his killer be brought to justice, and democracy restored to his country of Honduras.
Posted by Unknown at 4:18 PM
Email ThisBlogThis!Share to TwitterShare to FacebookShare to Pinterest