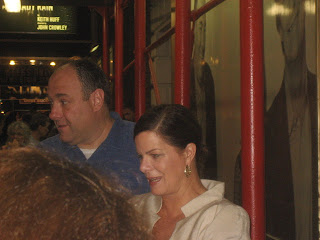 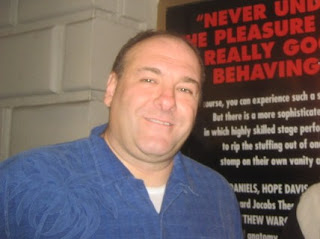 'Soprano' Gandolfini's SF Fan Club
& 'God of Carnage'
I was back in New Jersey last week for a niece's wedding and also spent a few days in New York after seeing my family. One of the Broadway shows I wanted to see, the Tony-award winning comedy "God of Carnage," had reduced-price tickets on Tuesday night, so I caught the play and enjoyed the production immensely. It would impossible to not have a good time, considering the cast includes Jeff Daniels, Hope Davis, James "Tony Soprano" Gandolfini and Marcia Gay Harden, and they're all in top comedic form.

After the show, two of the stars, Gandolfini and Gay Harden, spent a lot of time talking to fans and signing Playbills outside the stage door on W. 45th Street. Neither star was in any rush to speed off in a chauffeur-driven car, so it was easy to snap a few pics and exchange small talk with them.

I told Gandolfini, who played a gay hit-man in the terrible Julia Roberts and Brad Pitt film "The Mexican," that I was from his San Francisco Fan Club, which easily brought a quizzical look to his face. I don't know if that was because he interpreted San Francisco as code for gay, which it is, or if he doubted such a club exists. It does, and I'm the sole official member.
Posted by Unknown at 9:53 AM
Email ThisBlogThis!Share to TwitterShare to FacebookShare to Pinterest

Jimmy is so lucky to have you as a fan!