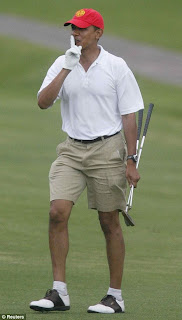 BAR, Chron: Obama in SF for
Golfing During Cleve's DC March
In last Thursday's Bay Area Reporter, writer Seth Hemmelgarn informed readers of where the president might be in early October, as lots of gay were to descend on DC to pressure him and Congress to deliver legislative changes to our community. From the BAR:

When gay and allied supporters converge on the National Mall in Washington, D.C. next month for the National Equality March, President Barack Obama, whom they are focusing on in their call for equal rights, might very well be in San Francisco.

Obama, along with former Presidents Bill Clinton and George H.W. Bush, has been invited to San Francisco for the Presidents Cup golf tournament, which takes place at Harding Park Golf Course October 6-11.

The National Equality March takes place October 11, which is National Coming Out Day.

Since the BAR lacked confirmation and hedged on whether Obama would actually be on the other side of the country, in America's Gay Mecca, it was prudent of the gay paper to say he might be here at the time of Cleve Jone's march on DC.

However, former San Francisco Mayor Willie Brown, in his regular Sunday column for the Chronicle, now confirms Obama will be far, far away from the Jones march:

Better get your tickets early to next month's Presidents Cup golf tournament at Harding Park, because it promises to be a real Oval Office affair.

My sources tell me the old dog, Bill Clinton, will be here for the opening and the new dog, Barack Obama, will be on hand at the end to hand out the trophies. [...]

Congrats to the BAR for scooping everyone on this story, and thank you, Willie, for verifying the BAR report.

Posted by Unknown at 4:22 PM
Email ThisBlogThis!Share to TwitterShare to FacebookShare to Pinterest

Well, it seems to me that this would be a good chance for us queers in the bay area to bring some pressure on Obama. Tell me that there wouldn't be a lot of press coverage if mobs of fags and dykes decided to demonstrate at the golf course. I mean, think about it, the TV satellite trucks are going to be there anyway...

The MOW organizers have not "focused" on Obama. Rather, they have let him off the hook for his backpedaling, failures and betrayals. They are staging the march at a time when it will have the least impact on Obama and the Democrats, and Cleve Jones' call for "working the Congressional districts" is a thinly veiled effort to elect more Democrats. Boy, that's worked out well for us.

By all means, go for it. Protest Obama, the man whose worthless LGBT promises ought to have been judged in the harsh glare of his opposition to our right to civil marriage.

thanks for commenting. first, paul, if you want to get something organized, lemme know if you do so, and i'll share your protest info on my blog. not sure if you're in SF. if i hear of any plans to do something while the Big O is in town, i will share the info.

second, bob i'm kind of surprised to read your comments because you and your group, gay lib network, are staging an action at cleve's march next month. sure, your action is at the white house and i wish you lots of folks turning out for it, but i think the real point of the DC mess is to feed cleve's ego and keep gays in the democratic party fold.

even if a decent crowd is there on october 11, i don't expect real or big change.

Michael, our organization, Gay Liberation Network, decided by majority vote to give critical support to the MOW in spite of our criticisms concerning its timing, its top-down organization, its failure to target Obama, and the transparent effort to "keep gays in the Democratic party"-- as you correctly put it.

The majority has decided to make lemonade out of the lemons handed to us by Cleve Jones, David Mixner and Torri Osborne.

I don't back this decision, and am
staying away from DC because I'm concerned that the White House picket will be eclipsed by the main action with its chants of "Yes We Can!" and the self-serving rhetoric of Democratic party hacks and their hangerson in HRC and NGLTF.

Soon, in my view, those of us committed to direct action and breaking with the Democrats, need to meet for a strategy session.