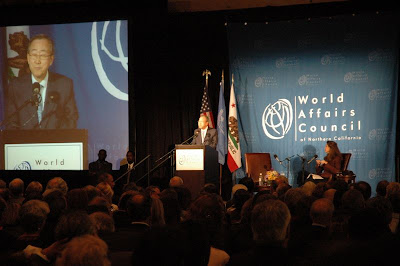 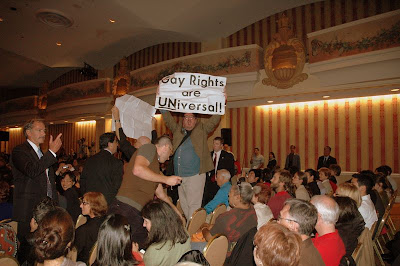 (Photo credit: Clinton Fein of Annoy.com. Kindly give him credit, if you re-use his photos.)

(ZombieTime.com captured the event on video and has posted it YouTube.)

SAN FRANCISCO (July 26) -- A group of activists staged a protest at an evening meeting at the Fairmont Hotel featuring the United Nations Secretary General Ban Ki-Moon, in order to protest the unconscionable, murderous silence of the United Nations concerning continued violence and executions globally which specifically target gays and lesbians. Ban was speaking before the World Affairs Council of Northern California, as San Francisco is considered the birthplace of the UN.

The nonviolent protesters twice interrupted Ban’s speech, first standing on their seats, chanting "Break the silence! Talk about about gays!” while holding up signs which read “Gay Rights Are UNiversal", capitalizing the letters UN to drive home the point that the UN has not accepted its responsibility to monitor and defend the human rights of gay and lesbian people worldwide.
UN Secretary General Ban replied, "That is most unusual welcome for me . . . As Secretary General, I'm supposed to answer all questions . . . The gay rights issue is very sensitive."
The protesters included Michael Petrelis and Hank Wilson, longtime LGBT activists, who were escorted out of the hotel and questioned by U.S. Secret Service agents.

Thirty minutes later, George Duvoisin, a gay youth advocate, wearing a large rainbow flag draped over his shoulders, rose up and asked Ban, "What about gay rights, and specific language in UN documents for gays and transgender people to protect against violence and discrimination?"

The San Francisco action heralds a series of demonstrations across the world in August to ban anti-gay violence across the world. August 3 and 4 have been cited as the Global Days of Gay Solidarity, with protests planned for cities across the globe.

“The UN has been silent for far too long, as our gay brothers and lesbian sisters are aggressively selected for human rights violations, torture and execution across the globe, simply due to their sexual orientation,” said Petrelis, who organized the protest.

“In the last year alone, our brothers and sisters have been maimed and slaughtered in too many incidents around the world,” said Hank Wilson. “This includes the violent attacks on gays in Eastern European pride marches; the killings of Jamaican gays; and the ongoing executions of gays in Iran. The United Nations never fails to speak out against injustice and human rights violations as they happen, but they are criminally silent when it comes to the murders of lesbians and gay men.”

George Duvoisin acknowledged that the UN had made a modest recent gesture towards support for gays and lesbians. On July 23, the UN Economic and Social Council (ECOSOC) granted consultative status on Friday to two nongovernmental organizations (NGOs) that address human rights violations based on sexual orientation and gender identity.

In addition to the alarming homophobic incidents cited by the activists, ongoing injustice against gays and lesbians continues across the world. Same-sex relationships are illegal in more than 70 countries, with consenting adults facing jail terms ranging from one year to life imprisonment, and even execution in six countries.

Examples of homophobic persecution include: Execution of gay males (or those perceived to have had same-sex relations) in the aforementioned Iran and Saudi Arabia. Nigeria, Uganda and Malaysia punish same-sex relations with maximum penalties of ten years to life imprisonment.

Queer-bashing mobs and death squads target gays for violence and murder in Jamaica, Iraq and parts of Brazil and Mexico. Even the formation of organizations to promote legal equality for gays and lesbians are illegal in certain parts of the world.

The San Francisco action heralds a series of demonstrations across the world in August to ban anti-gay violence across the world. August 3 and 4 have been cited as the Global Days of Gay Solidarity, with protests planned for cities across the globe. More info on the Aug 3 and 4 action is located here.

-30-
Posted by Unknown at 12:41 AM
Email ThisBlogThis!Share to TwitterShare to FacebookShare to Pinterest
Labels: Ban Ki-moon, gays, human rights

I agree with you totally on this important issue and wanted to let you know that. Many people don't know about the persecution of gays in many areas of the world - or choose to look the other way. Sometimes, you just have to stand up and yell.

(Found your blog via LGF and Zombietime.)

I found your blog via LGF and zombietime and also read your Kos post.

I find it rather interesting that your dKos post didn't receive much support.

His Excellency seemed a bit befuddled about your challenge to him.

Send him a 1-paragraph thank you note and see if that will help in opening a dialogue with him. You never know, it could lead to a UN condemnation of the "due process" in use by Iran & Saudi Arabia.

Just watched the clip on JMG. That took alot of guts -- way to go!