After 99 Lashes, Iranian Woman Spared From Death by Stoning. Parisa Akbari is Free! 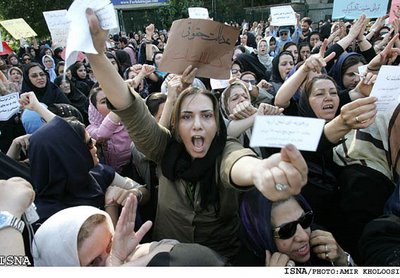 Through my organizing work this year on behalf of gay and lesbian Iranians, and my opposition to the death penalty in all countries, I made the acquaintance of Lily Mazahery, and Iranian-American lawyer working from Washington, DC, on behalf of all women in Iran, and especially women in the Islamic Republic facing death by stoning or any other means.

Today, Mazahery shared some good news with me. An Iranian woman who had been on death row, is now free, her stoning sentence withdrawn.

Now, attention must focus on the other women in Iran jeopardy of being stoned to death. You can find more info on these women at this Amnesty International web site. Go there and learn who and where to send appeals to in Iran, asking that they not be executed.

And click here to read a recent column by Nat Hentoff in the Village Voice about the barbaric Iranian practice of stoning women until dead.

Here's the wonderful news from Mazahery:

Parisa Akbari, one of the Iranian women sentenced to death by stoning for “adultery,” walked out of jail as a free woman today after receiving 99 lashes for having sex outside of marriage. Based on a motion filed by her new, volunteer, lawyer in the High State Court, Parisa was granted a new trial, which was held last month. At the new trial, lawyers were able to present evidence of Parisa’s innocence.

Additionally, the lawyers successfully argued that the lower court had used erroneous legal and Islamic standards in issuing Parisa’s original sentence. Based on the new evidence and legal arguments, the High State Court dismissed the original charges against Parisa and vacated the sentence of death by stoning.

According to Parisa’s lawyer, who is also representing Ashraf Kalhori (another woman sentenced to death by stoning for committing the crime of “adultery”), although the head of the Islamic Republic’s judiciary has issued an stay of execution in Ashraf’s case, Ashraf continues to remain in jail and on death row, awaiting a response to her motion for acquittal.

The lawyers representing Ashraf have been informed that her case has been sent back to the prosecutors for a new investigation in her case and they are currently working to find out more details about this new investigation.

Posted by Unknown at 8:49 PM
Email ThisBlogThis!Share to TwitterShare to FacebookShare to Pinterest