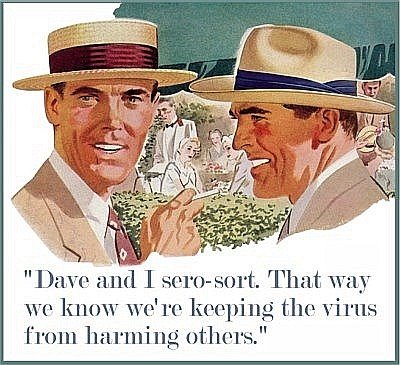 An important abstract from San Francisco was presented today at the Toronto AIDS conference showing new HIV infections reached a plateau years ago, after peaking seven years back in 1999, and that the reason for this good news is probably due to serosorting practices developed by sexually active gay men, both HIV poz and negative. To me, it says much about the HIV prevention industry, which does not promote in any way serosorting as an effective means to stop HIV, that serosorting plays a crucial role in preventing and controlling new infections.

HIV serosorting? Increases in sexually transmitted infections and risk behavior without concurrent increase in HIV incidence among men who have sex with men in San Francisco

Conclusions: HIV incidence among MSM appears to have stabilized at a plateau following several years of resurgence. Increases in the selection of sexual partners of concordant HIV serostatus may be contributing to the stabilization of the epidemic. However, current incidence rates of STI and HIV remain high. Moreover, a strategy of risk reduction by HIV serosorting can be severely limited by imperfect knowledge of one´s own and one´s partners´ serostatus.

Back in May, the Bay Area Reporter ran an excellent piece by Matthew Bajko about serosorting and how the city was about to get the nation's first media campaign about the practice.

The San Francisco AIDS Foundation, however, is about to become the first AIDS agency in the country to discuss serosorting in a social marketing campaign. The agency plans to launch advertisements and a Web site this June that will not only discuss serosorting but other controversial methods like "negotiated safety" or seropositioning – where a negative man will only top or a positive man will only bottom during sex.

Well, two months later the AIDS foundation has not launched its serosorting campaign, but it may not matter much that this appears to be an empty promise from the foundation, because gay men are engaging in serosorting sexual practices that do much to halt new HIV infections, all without any help from HIV prevention groups or the Centers for Disease Control and Prevention.
Posted by Unknown at 12:13 PM
Email ThisBlogThis!Share to TwitterShare to FacebookShare to Pinterest