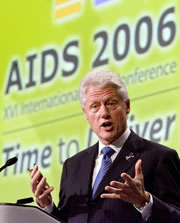 The Clinton foundation’s budget last year was $30 million, raised from private donors. Mr. Clinton, who oversees its operations full time, has plunged into many causes, from childhood obesity to tsunami relief to global warming, but he has made his most substantive contribution on AIDS.

I don't know where the Times got that $30 million figure from, because after looking at the latest IRS 990 filings for Clinton's two charities, it appears as though the paper reported an incorrect amount.

The William J. Clinton Presidential Foundation, based in Little Rock, Arkansas, in its most recent IRS 990 report, shows the foundation had revenue of $57.7 million. A little bit less than double of what the Times claimed was the foundation's budget last year.

His other charity, the Clinton Foundation HIV/AIDS Initiative, which is headquartered in Quincy, Massachusetts, had a much smaller budget, according to its only IRS 990 filing, and that amount was $5.9 million. Not exactly pocket change, but also not anywhere near the $30 million figure reported by the Times.

So far, the Times has not printed a correction about the wrongly reported figure for Clinton's foundation.
Posted by Unknown at 10:11 AM
Email ThisBlogThis!Share to TwitterShare to FacebookShare to Pinterest