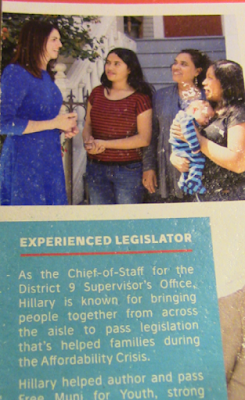 This is quite odd. Hillary Ronen, a candidate for Supervisor of District 9 and longtime aide to the incumbent David Campos, doesn't mention him by name in a campaign leaflet circulating on the streets.

Here's what the leaflet says when directly referencing where she's employed:

"As the Chief-of-Staff for the District 9 Supervisor's Office, Hillary is known for bringing people together from across the aisle to pass legislation that's helped families during the Affordability Crisis."

Why would Ronen omit Campos' name and not included once in the leaflet?

While Campos certainly has many critics and a lot of folks will be happy when he no longer represents the Mission and surrounding neighborhoods on the Board of Supervisors, his name can't be such a turnoff to potential Ronen voters that it can't be stated on her campaign materials.

Could I be wrong about that?

Posted by Unknown at 9:20 PM
Email ThisBlogThis!Share to TwitterShare to FacebookShare to Pinterest