Count me among the large number of America who favor more regulation and tracking of firearms and bullet.

My recent public records request to the San Francisco Police Department for info on their gun buybacks in recent years produced valuable data.

First off, the total costs for the buybacks comes via the Mayor's Office of Violence Prevention Services with the coordination of the Board of Supervisors and other govt and private agencies, according to the SFPD. The only costs borne by the department are for personnel to staff the buyback events.

Over at that mayoral office's web page, there is nothing but short bit of info about public safety and the appointment of Greg Suhr as police chief. The page's last update appears to have been in 2012 and there's nothing mentioned about the gun buyback program.

The SFPD states $100 was paid for any gun and $200 for assault-type weapons and they continue to search for info about precisely how many types of firearms were paid for through buybacks. Partial fiscal details are better than none and I hope to receive more before the week is over. 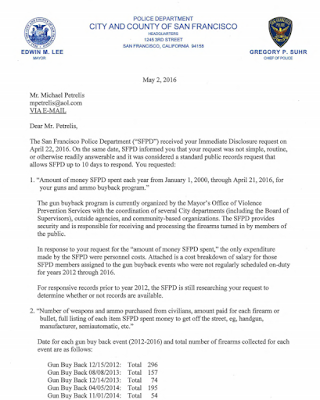 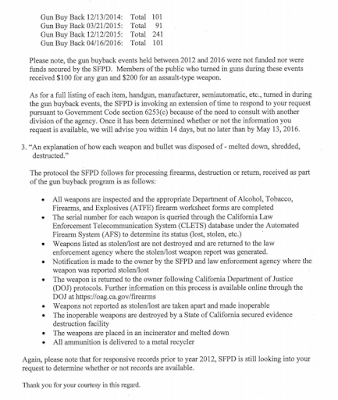 Here are the sub-totals for numbers of guns taken off the street via buybacks, for years available:

How much money was spent to get these guns off the streets? Using the $100 per any gun figure multiplied with 1069 equals a minimum of $106,900 used to reduced firearms in the community.

Public dollars well spent, in my view.
Posted by Unknown at 2:43 PM
Email ThisBlogThis!Share to TwitterShare to FacebookShare to Pinterest

I need to correct your premise. This was not money spent (well or otherwise) to get these guns "off the streets", as none of these guns were "on the streets" to begin with.

As several studies have shown, the guns surrendered at buybacks are the weapons *least* likely to be involved in crime. Most are old rifles or shotguns that people have had hanging around their garages or attics for years if not generations, or unreliable or unsafe heirloom handguns.

If a criminal has a gun he is using to commit crimes, or for protection while committing crimes, he has gone to some lengths to get it, and he's not giving it up for $100!

Many more are homemade guns specifically made to be surrendered - if you can make a pistol with basic tools for $20 in an afternoon, and then surrender it for $100, why wouldn't you?