A handful of democracy activists staged a thirty-minute protest and press conference today, Tuesday, March 15, at Donald Trump's office tower at California and Kearny Streets during the noon lunch hour. 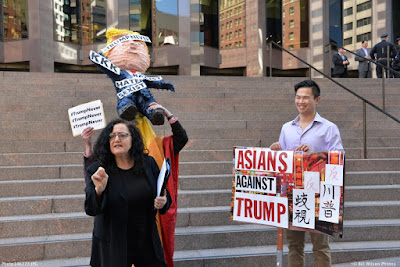 Melanie Nathan was our primary spokesperson who deplored Trump's many incitements of hate against immigrants, women, people of color and refusal to repudiate white supremacist backing of his campaign.

Representing Asians Against Trump was Jeffrey Kwong, with a sign printed in English, Cantonese and Mandarin. 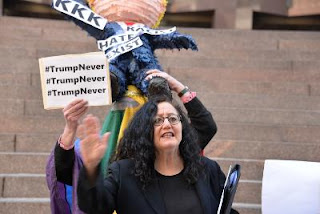 I wore my rainbow burka to add LGBT color and held aloft our #TrumpNever pinata. Be sure to read Melanie's report at her blog which includes her statement read today. 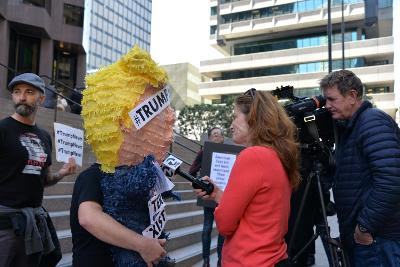 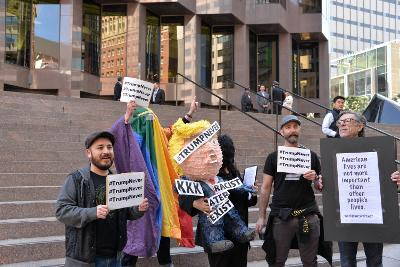 Two furry hubbies, John and Barney, participated as did Curt Weschler, who came with his own sign from the World Won't Wait coalition. We chanted, "Donald Trump! Racist! Sexist! KKK! Go Away!" 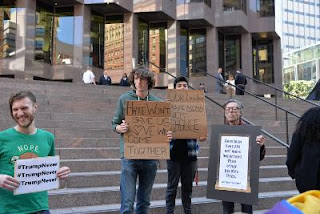 Three students - Thomas, Hank and Gabriel - stood with Walter and displayed their signs for the cameras and passersby. 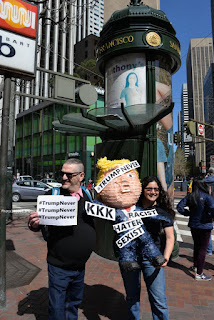 Parading around the Financial District with the #TrumpNever pinata was a magnet for folks with cameras, snapping pics as we walked by or holding the pinata in their arms, giving one of us their cameras so we could take their photos with the prop!

All photos above are credited to Bill Wilson. 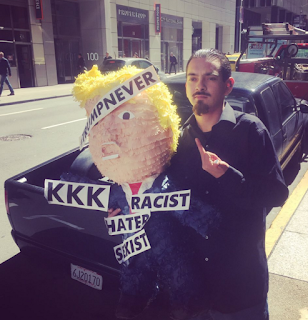 This young dude named Juan requested pictures of him with the pinata and his souped up low-rider truck, as he gave Trump the finger. Credit for this image goes to Steve Rhodes.

Posted by Unknown at 11:18 PM
Email ThisBlogThis!Share to TwitterShare to FacebookShare to Pinterest

The picket sign is in Chinese which is a written language. Mandarin and Cantonese are spoken languages.