For some odd reason, the Justice 4 Mario Woods coalition is doing PR work for Gascon by promoting the panel's meeting today, Monday, February 22, from 2:30 to 5:30 pm at the main branch of the public library at Grove and Market Streets. The Facebook page for the meeting raises no questions about the panel, which surely pleases the DA's office.

Gascon alone picked the panelists, hardly a sign of community involvement or transparency, and the leader of is Anand Subramanian of the nonprofit, PolicyLink, which has posted a two-page explanation detailing how the DA controls this process. They claim, "The Panel is operating as a passive meeting body pursuant to San Francisco Administrative Code Chapter 67.4", and that law states the following:

"(1) Such gatherings need not be formally noticed, except on the City's website whenever possible, although the time, place and nature of the gathering shall be disclosed upon inquiry by a member of the public, and any agenda actually prepared for the gathering shall be accessible to such inquirers as a public record." 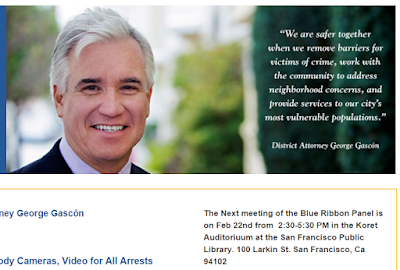 Gascon's site contains no agenda for the meeting today and no agendas for previous hearings, and forget about any minutes. This lack of sunshine over Gascon's alleged accountability and transparency panel is the basis of my complaint filed today with the Sunshine Ordinance Task Force.

Bear in mind, the SOTF's recent annual report labeled Gascon as woefully ignoring his open govt enforcer duties: "The District Attorney's office has failed to respond to any referral for enforcement from the Task Force, including a failure to provide any explanation to the Task Force or the underlying complainant. Enforcement of the [Sunshine] ordinance is essential to protecting the public's right to open government."

The only addy for the panel is not one with an "@sfgov.org" email and it is where I've sent this letter, requesting more info about today's meeting and raising necessary questions about the supposed independence of this body and why the Justice 4 Mario Woods coalition is shilling for the DA.

"Who are you, the person who handles this addy, SFBlueRibbonPanel@mto.com, and are you a staffer for Gascon and his DA office? I am concerned that Gascon is using this panel to further his own career.

"He set up the panel, decided who would serve on it and so far has not posted any agendas of previous hearings or minutes of them. Why are there no community members on the panel and only judges, selected by Gascon, who will issue a report at some unspecified date. Alarms are going off in terms of, um, accountability and transparency, that there is no public agenda or anything of substance about Gascon's panel on the DA's site.

"Just a press release announcing the expansion of the panel last year, http://sfdistrictattorney.org/district-attorney-expands-taskforce-investigating-officer-misconduct, and nothing about who the other members of the panel are. On Gascon's opening page, http://www.sfdistrictattorney.org/, there is an alert about the three hour Feb 22 meeting and no agenda shared with the public.

"Frankly, as someone who had Gascon gear up the law enforcement machinery against me in 2012/2013, and who has taken him to task at the Sunshine Ordinance Task Force for numerous transparency violations, I think Gascon is part of the police/law enforcement accountability problem and not a key player toward solutions that serve the community.

"Do you really think the former head of the SFPD gonna deliver genuine cop accountability, especially he's refused to indict any cop-killers? Questions need to be answered about the lack of transparency with Gascon's panel. Exactly at what time tomorrow is public comment and who's running the show at the library, the community or Gascon? Answers please!"
Posted by Unknown at 11:46 AM
Email ThisBlogThis!Share to TwitterShare to FacebookShare to Pinterest