Nearly two-weeks ago Ross Mirkarimi was sworn in as San Francisco's sheriff, under a cloud of domestic abuse charges, and he's maintained that he can perform his official duties while also wrestling with a pending trial, hours of time consulting with his personal attorney and strategists, and the restraining order temporarily keeping his family broken and separated.

Follow the link to the department's site, which is woefully out-of-date and lacking in many areas needing serious revising and updating, and you'll find this handsome profile photo of Hennessy on the sheriff's biographical page: 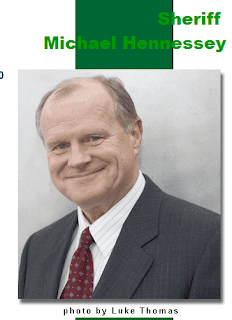 The organizational chart for the department also lists Hennessy as the boss. In non-Mirkarimi matters, the In the News page was last revised in January 2001. The Who We Are page lists staff titles, snail mail addresses, phone numbers and only one email address: Sheriff@sfgov.org.

It's clear that under Hennessy this city office didn't develop healthy and robust public engagement through the web, and Mirkarimi needs to immediately address the pathetic and anemic approach of his public information office, if only to update the department's two sites to reflect the fact that he is the new sheriff.

If Mirkarimi can't get his media office up and running, he's also unable to adequately delegate other authority and provide leadership for the department and the public. I just don't see how he can credibly maintain that all his personal legal woes are not negatively impacting how he carries out his duties.
Posted by Unknown at 9:26 PM
Email ThisBlogThis!Share to TwitterShare to FacebookShare to Pinterest