(Ambassador Warlick shakes hands with Gay Pride organizer Lazar Pavlovic at the October 2010 Belgrade rally. Credit: Jamie Kirchick.)
The LGBT community of Serbia last year managed a Pride march and related events, despite violent threats beforehand and bloody assaults connected to the march. The U.S. Ambassador, Mary Warlick, extended support to the Pride organizers and also was present for a rally before the 2010 march.

As a member of Gays Without Borders, I've been emailing Ambassador Warlick and her dedicated staffers, requesting that she again appear a Pride event, but I've not heard back from them about her plans for this weekend's lectures and march.

This morning, I heard from Billy Urich of Connecticut who traveled to Belgrade last year and is on his way there now. He's also chair InterPride Committee on International LGBTI Human and Civil Rights and performs other global duties on top of showing solidarity with our brothers and sisters in Serbia.

To the LGBT folks of Serbia, I say on behalf of Gays Without Borders in San Francisco, we stand in solidarity with you this weekend as you again organize for visibility and tolerance. We hope your Pride events are free of threats and harm.

Here's the alert from our embassy that was sent to Billy, in as a JPG, and excerpts from the text. Click image to enlarge: 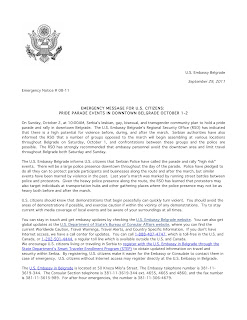 On Sunday, October 2, at 10:00AM, Serbia’s lesbian, gay, bisexual, and transgender community plan to hold a pride parade and rally in downtown Belgrade. The U.S. Embassy Belgrade’s Regional Security Office (RSO) has indicated that there is a high potential for violence before, during, and after the march. Serbian authorities have also informed the RSO that a number of groups opposed to the march will begin assembling at various locations throughout Belgrade on Saturday, October 1, and confrontations between these groups and the police are possible. The RSO has strongly recommended that embassy personnel avoid the downtown area and limit travel throughout Belgrade both Saturday and Sunday.

The U.S. Embassy Belgrade informs U.S. citizens that Serbian Police have called the parade and rally “high risk” events. There will be a large police presence downtown throughout the day of the parade. Police have pledged to do all they can to protect parade participants and businesses along the route and after the march, but similar events have been marred by violence in the past. Last year’s march was marked by running street battles between police and protestors. Given the heavy police presence along the route, the RSO has learned that protesters may also target individuals at transportation hubs and other gathering places where the police presence may not be as heavy both before and after the march.

U.S. citizens should know that demonstrations that begin peacefully can quickly turn violent. You should avoid the areas of demonstrations if possible, and exercise caution if within the vicinity of any demonstrations. Try to stay current with media coverage of local events and be aware of your surroundings at all times.

You can stay in touch and get embassy updates by checking the U.S. Embassy Belgrade website. ...

We encourage U.S. citizens living or traveling in Serbia to register with the U.S. Embassy in Belgrade through the State Department’s Smart Traveler Enrollment Program (STEP) to obtain updated information on travel and security within Serbia. ...

Posted by Unknown at 12:23 PM
Email ThisBlogThis!Share to TwitterShare to FacebookShare to Pinterest