Unlike previously packed hearings, this one had plenty of empty seats for the public. The legal stuff got so tedious for me, at certain points, I felt I was bearing witness on behalf of many activists, wise to stay away from such a dull hearing. Why did I take notes and listen to the entire proceeding? Because it's homo-history in the making in my backyard and I wouldn't miss this extraordinary opportunity.

For an excellent and comprehensive look at the details of the matters before Judge Vaughn Walker today, check out Karen Ocamb's report at her blog. Tune in to Doug Sovern's good recap of today's actions at KCBS NewsRadio here. Be sure to check out Chris Geidner's terrific LawDork.net blog for more info on other pre-trial moves.

- No sign of Gay Inc orgs or anyone from their staffs. Same goes for the missing anti-gay forces.

- Not only was Imperial County, which voted heavily for Prop 8, late to petition the court to join the defendants side, doing so yesterday, but the lawyer for the Southern California county was late for court this morning.

- On several occasions, Walker, who I think could be a fab host at a piano in a swank cafe, would make a funny comment or joke from the bench, bringing forth many laughs and alleviating my boredom.

- Even though no one in the court said it, this lawsuit is our Plan B, the alternative plan leaders of Maine's recent losing gay marriage proposition and Freedom to Marry's executive director lack. Nice to see Plan B moving ahead so swiftly.

- Charles Cooper, the lead attorney for the supporters of Prop 8, refused to enter the media room and make himself available for questioning by the press and a blogger. When spotted outside the courthouse, local TV and radio reporters tried to get him to go on the record for a few comments, but he refused the interview requests.

Here are a few pics from the news conference and outside the federal building on Turk Street: 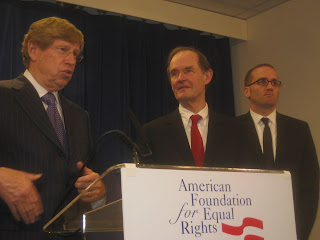 Ted Olson and David Boies, attorneys for the plaintiffs, stand with Chad Griffin, head of the American Foundation for Equal Rights, the backer of the lawsuit, talk to the media. 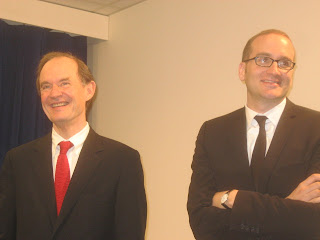 Boies and Griffin break into smiles. 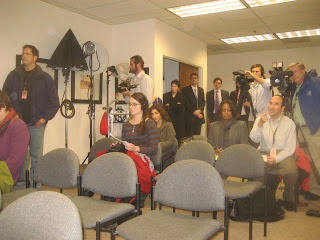 Member of the media, and a few lawyers in ties, listen to Olson and Boies state they're ready for the start of trial on January 11, 2010.
Charles Cooper telling a local TV crew he won't speak with them on the record. 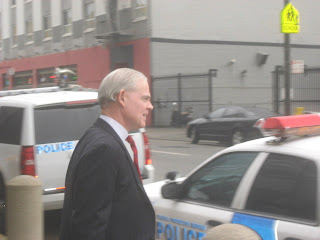 Cooper heading to the street to hail a taxi.

Posted by Unknown at 3:31 PM
Email ThisBlogThis!Share to TwitterShare to FacebookShare to Pinterest

Unless you affirmatively knew the identities of everyone in the courtroom, it seems unlikely that you can state that there was no sign of LGBT legal orgs, or Gay Inc., as you say.