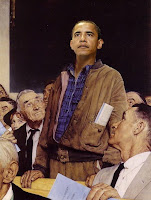 SF Weekly: Prop 8 Town Hall
Could Get Ugly
Oh, puh-leeze. The SF Weekly thinks the February 26 Prop 8 meeting may get ugly because of me?

The ugliness of a terrible, closeted ballot campaign, the flushing of $43-45 million gay dollars the toilet, the loss of marriage equality in California, the obscene length of time it took for San Francisco A-gays to hold a town hall meeting are matters that simply refuse to go away.

And it isn't as if lots, and I mean hundreds, of people haven't said to me, and in general, "stop looking back and criticizing the mistakes. Our leaders were accountable in LA and Denver; no need for more accountability in SF. Focus on the future."

But despite all those naysayers, a simple open forum about the Prop 8 mess and the stench of the aftermath is finally going to happen, and it isn't because I've relentlessly demanded a meeting. If it were just me being pushy about a forum here, the February 26 town hall at Civic Center auditorium wouldn't be happening.

In addition to questioning what I may say or do next week, I wish the SF Weekly took the time to ask the A-gays organizing the meeting they evolved from no desire for it to now pulling out some of the stops to organize and promote the meeting and make it a success?

I say some of the stops, because if you look at the calendar for Equality California, the group that put on the LA summit last month and will gear up its machinery every time Geoff Kors wants to remind the community that he is somehow relevant, you'll see the February 26 forum is not listed. Did I mention EQCA has not issued an announcement about the meeting?

Click here to see that Kate Kendell's National Center for Lesbian Rights is following EQCA's lead and not putting out a release for the meeting. If anyone has seen a release from gay politicos Dufty, Ammiano or Leno, all who will be at the forum, kindly share those releases to me. I can't locate them.

On the other hand, the mainstream corporate media heterosexual alternative paper the SF Weekly, is doing more to get the word, um, out about the forum than the leaden gay advocacy professionals and gay elected officials combined. Harvey Milk must look down from heaven, see this complacency from the A-gays, and weep.

From the SF Weekly:

Town Hall Meeting to Address Prop 8
SNAFU Could Get Ugly

Almost four months after voters stripped gays of their right to marry in California, a Town Hall-style meeting addressing what went wrong will finally happen. Supervisors Bevan Dufty, Assemblyman Tom Ammiano, and Senator Mark Leno will all apparently be there, as will ball-busting gay blogger and activist Michael Petrelis, who has spent a whole lot of time castigating the architects of the No on 8 campaign. ...

Then said he hoped the executive committee, which included Kors, would spend the next year sweeping the streets of gay neighborhoods and participating in other acts of penance for wasting $45 million on losing gays the right to marry. Yep. This meeting could get very interesting.

It happens Thursday, February 26th, between 6:30 and 9 p.m. at Bill Graham Civic Auditorium. Pollster David Binder will present findings on the vote, and Cynthia Laird, the editor of the Bay Area Reporter, will lead the discussion. Apparently, she'll be ensuring accountability and objectivity, whatever the hell that means.

Posted by Unknown at 6:38 PM
Email ThisBlogThis!Share to TwitterShare to FacebookShare to Pinterest

The fight for marriage equality is, I think, the ultimate equality and the ultimate unforgiving mirror. And you come face-to-face with every last bit of homophobia that might lurk in the dark hidey holes of your psyche.

Think about it: The act of inviting people who always got to be legally, culturally, even just vaguely superior to you into a room to celebrate your relationship, exactly as you have celebrated theirs. Expecting them to be happy for you, after decades of accepting less, even from people you love. Marriage is a mirror for us all, including gay leaders who decided to go on extended vacation during the campaign. The fight for marriage equality can be painful and personal and revealing.

I'm not surprised that the big professional strategists recommended a euphemism-driven, closet campaign. They always have. I'm not surprised they rejected real voices, real stories, and the raw appeal to the heart. They know nothing about it. Not one thing.

The scandal is that what gay people know very personally to be effective -- in their lives, in the families, among people who say they are our friends -- was ignored $45 million worth.

The scandal is that it was a typical DNC/HRC corporate show, with a straight guy at the helm. And a bunch of well-connected gays making their bucks, taking their vacations, nodding around conference room tables.

plus, please feel free to retweet!