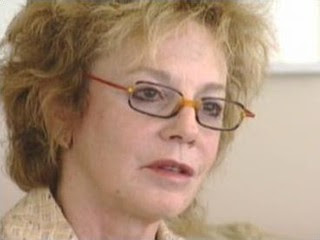 SF Chronicle Piles on Embattled
Lesbian Pol Carole Migden
Career politician Carole Migden is someone I've never supported nor voted for. She's just too slimy, for a politician regardless of gender and sexual orientation, on many ethical choices in my opinion. But for decades San Francisco voters have elected her over and over, many times in races where she's faced zero competition.

And for most of her elections and tenure in various offices, the SF Chronicle has rarely held her to account, nor has the paper always reported on her ethical lapses, which are legend in Northern California. Today's Chronicle, with three separate things on her latest troubles, seems like compensation for the years of treating her with soft cushy gloves over the course of her political tenure.

Starting in the national news section, the Chronicle notes she didn't get the state Democratic Party's endorsement over the weekend:

State Sen. Carole Migden's growing campaign finance problems caught up with her Sunday when delegates to the California Democratic Party's convention overwhelmingly refused to endorse her for re-election.

While the convention delegates typically quickly ratify the local endorsements, Leno, who has been running against Migden for more than a year, managed to collect more than enough signatures Saturday night to force the entire convention to vote on the endorsement.

That was bad news for Migden. While the former San Francisco supervisor has plenty of friends in her district from her years as local party chair and her time in the state Assembly and on the state Board of Equalization, her history of driving problems and financial troubles didn't play well with delegates from elsewhere in the state. [...]

Then in the Chronicle political gossip column in the local section, readers are again told about her troubles at the state Democratic convention:

Not only was the rejection an embarrassment, but the vote also cut off one of the last big sources of money the embattled Migden was counting on in her two-front fight against fellow Democratic rivals Leno and former Assemblyman Joe Nation.

Migden - who is running third in the polls - was already under the gun after the state's Fair Political Practices Commission nixed her using $1 million in the June primary that she had raised in earlier races.

Migden and her allies in the state Senate had hoped to make up the campaign cash loss by indirectly pumping about $1.5 million into the race through the Democratic Party. But they needed the party endorsement for the play to work, and Leno pulled out all the stops to block it. [...]

Either way - Leno comes out ahead.

And finally, in the only editorial in the Chronicle today, Migden is slammed for many misjudgments, including a federal lawsuit that could undo state law holding political to fair practices regarding their campaign funds:

But long after the Democratic nomination for Senate District 3 is settled, the most significant legacy of this hotly contested primary may be what it does to some of the most well-established principles of California's campaign finance laws.

If Migden prevails, she could have an extra $647,000 to pour into the homestretch of her race against Leno and Nation. But to do so, Migden and her attorneys will have to blow up a 27-year-old state law that regulates what departing legislators can do with "surplus" campaign funds. [...]

Tuesday's hearing will be on Migden's lawsuit against the FPPC, in which her attorney argues that the requirement that she needed to transfer the funds to a new account before leaving the Assembly was "arbitrary." She also contends that restrictions on the use of her surplus funds violate her First Amendment rights to communicate with voters.

Migden's characterization of the restrictions on surplus funds as a First Amendment issue is simply absurd. Americans do not have a constitutional right to spend money that is not, by definition, their own.

This case is worth watching, beyond its ramifications on Migden's re-election. We trust the U.S. District Court will see through her arguments of desperation to uphold these basic tenets of modern campaign finance law.

Whether she's behind the wheel operating a motor vehicle erratically and jeopardizing other people on the road, or misusing hundreds of thousands of campaign dollars, Migden is the epitome of a corrupt, out-of-control politician who should retire from public office. That is very likely to happen after June's primary.
Posted by Unknown at 3:44 PM
Email ThisBlogThis!Share to TwitterShare to FacebookShare to Pinterest