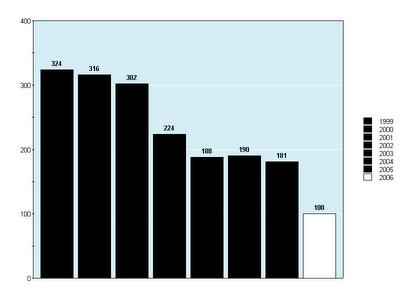 
You know the drill by now, don't you? New HIV or AIDS or STD stats come out from the San Francisco health department, showing continued declines of infections and full-blown cases, and DPH and local AIDS groups develop laryngitis. I blog on the latest figures, bringing some activist attention to them, and the city that has seen so much loss from AIDS over a quarter century, yawns mightily.

The SF DPH's new quarterly AIDS surveillance report was issued last week, and few are talking about it, and no media are reporting on it. The latest third quarter full-blown AIDS caseload fell again this year, to 100, and in the context of eight year's worth of third quarter AIDS reports on the web, the 2006 data is the lowest reported third quarter number in eight years.

That's almost a full decade of AIDS dropping. And this laudable development comes when there is a decline in new HIV infections, not to mention the rise in male rectal gonorrhea that is happening, not because of more rubber-less gay sex, it is due to an enormous jump in number of more tests for the butt-infection.

Doesn't anybody care that the damn good news about the epidemic proudly marches on?

When, and if, the AIDS epidemic in San Francisco ever ends, I believe historians will look back at all the available epi data and see the beginning of the end in the surveillance reports.

Let's go to the figures:

This excerpt comes from the Executive Summary of our latest epi data summary, that should be read by member of Congress, before he or she votes on any HIV/AIDS funding bill:

The current HIV/AIDS epidemic is characterized by no apparent increases in HIV infection rates over the past five years, and with considerable decreases in some populations. A number of factors may account for these trends.

And this passage is taken from the minutes of a recent health commission meeting:

An analysis of rectal gonorrhea trends in San Francisco revealed that between 2001 and 2005, reported cases of rectal gonorrhea increased more than two-fold, from 213 cases to 461 cases. STD Prevention and Control believes that a large part of this increase can be explained by its expanded rectal screening program and improvements in testing methodologies.

During this time period, the number of rectal GC screening tests supported by the STD Program increased 250%.

Posted by Unknown at 11:12 AM
Email ThisBlogThis!Share to TwitterShare to FacebookShare to Pinterest

When, in the early days, ACT UP came up with the brilliant slogan, Silence = Death, little did they know that decades later, in the context of AIDS Inc., Silence = Life. One day, when historians look at this epidemic, they will wonder why you were the only person who seemed to report the whole story, not just ones that make for shocking headlines or keep the money flowing in.

Keep it up Mike. I'm sure I'm not the only one who appreciates your persistence.