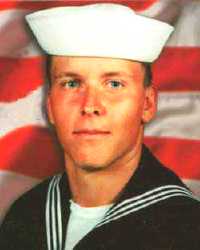 
It's Memorial Day and I'm remembering all the brave men and women who've served to keep America free, and that includes not just those who were in the armed forces, but also all the people who have worked to end wars, contain the military industry complex and redirect war funding to instead meet the health and housing needs of Americans.

And on this day of remembrance, let's recall the many gays, lesbians, bisexuals and transgenders who joined the military and served the country with honor and distinction, and, in particular, those gays who died serving America or were killed by homophobic policies and other soldiers or sailors.

One such individual, of course, was US Navy radioman Allen Schindler, who was murdered by another sailor in a brutal stomping death in a public toilet in Sasebo, Japan, in late October 1992.

During the two years leading up to the time he was murdered, Schindler had accepted his gayness and was subjected to constant, vicious antigay threats by other sailors on his ship the Belleau Wood. Those threats were repeatedly ignored by his captain and others in the US Navy and eventually Schindler died a horrific death, some say because of official attitudes designed to make gay sailors treated like less-than-human beings.

Schindler's killer was convicted of his death the week before Memorial Day 1993 and is serving his time in a federal penitentiary.

And Allen Schindler is not forgotten.
Posted by Unknown at 12:10 PM
Email ThisBlogThis!Share to TwitterShare to FacebookShare to Pinterest

Never remember the ship, Always remember a fine young man who was killed on service.
Never for the name Allen Schindler, Jr

I met Allen when I arrived aboard the USS Midway. He was a nice guy and welcomed us new guys aboard. Just wanted to say my condolences to his family and friends.