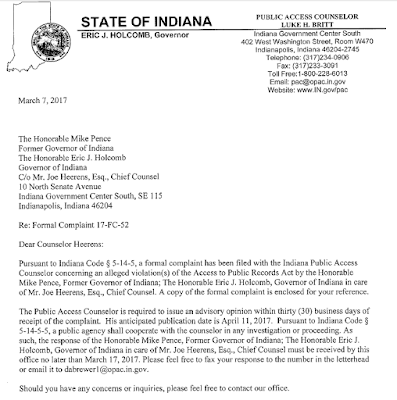 Veep Pence Must Reply to My Indiana Emails Complaint

In early February, I filed a public records request with the state of Indiana for copies of all emails sent or received by former First Lady Karen Pence, her husband Mike's most-trusted adviser.

The current governor's office claimed I didn't adequately define the records sought and refused to begin a search, so I filed a complaint with the Indiana Public Access Counselor. Any and all emails, regardless of topic, is clearly identifying known records.

Today, the PAC informed me of the following:

"The Public Access Counselor is required to issue an advisory opinion within thirty (30) business days of receipt of the complaint . . . As such, the response of the Honorable Mike Pence; Former Governor of Indiana . . . must be received by this office no later than March 17, 2017."

Stay tuned for his response and advisory opinion from the counselor.

I must praise the state of Indiana for creating this public access officer and giving the public an advocate to turn to when government officials withhold public records or otherwise violate transparency laws. 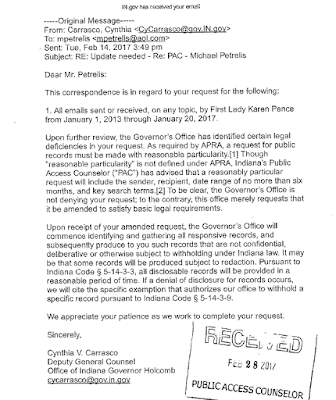 Posted by Unknown at 1:40 PM
Email ThisBlogThis!Share to TwitterShare to FacebookShare to Pinterest