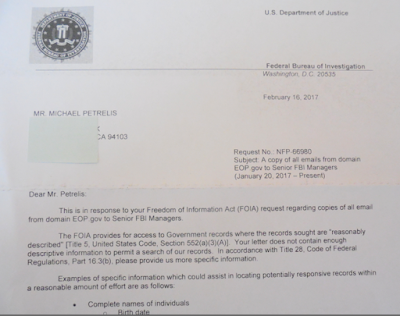 FBI v Privacy Board: Searches for Any EOP.gov Emails?

Despite millions of taxpayer dollars for the most advance computers and programs anywhere on the planet, the Federal Bureau of Investigation can't search for Executive Office of the President emails from the White House domain.

Excerpted from the FBI's February 16 response:

"This is in response to your Freedom of Information Act (FOIA) request regarding copies of all email from domain EOP.gov to Senior FBI managers.

"The FOIA provides for access to Government records where the records sought are 'reasonably described' . . . Your letter does not contain enough descriptive information to permit a search of our records . . . please provide us more specific information."

I'm able to search my emails using only a domain, so why can't the FBI with all it's cyber-capabilities and large staff look for emails to or from the EOP.gov since January 20? 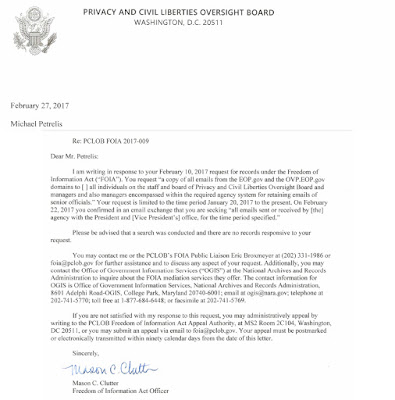 The same FOIA request for all EOP.gov emails since Trump was inaugurated as president was submitted to the Privacy and Civil Liberties Oversight Board, a body with important oversight of American intelligence departments and a much smaller budget for simple computer functions like searches. A February 27 letter said:

"Please be advised that a search was conducted and there are no records responsive to your request."

It says a lot about what is wrong with the FBI and how it (doesn't) conduct searches of its own senior managers' emails, but an obscure and woefully underfunded agency can carry out a search with the same terms.

A trusted FBI watcher source told me it would take litigation to force the agency to search for emails from the POTUS staff at the Trump White House, a possibility beyond my reach.

Btw, here are more details about the PCLOB from Jenna McLaughlin over at The Intercept site, published on March 3:

"There's a little-known federal agency whose job is to ensure U.S. spy agencies protect privacy and other civil liberties even as they work to defeat terrorists and criminals, and to blow the whistle when that doesn’t happen. But the agency, known as the Privacy and Civil Liberties Oversight Board, is down to just a single voting member — which means it has been stripped of nearly all its powers, according to emails obtained by The Intercept.

"The board was created by Congress in 2004, at the recommendation of the 9/11 Commission, to help the executive branch balance national security priorities with individual rights. After Bush administration officials heavily edited PCLOB’s first report, one member resigned, and Congress in 2007 turned it into an independent agency and expanded its writ to include oversight of congressional action.

"Still, the board remained obscure; some members of Congress seemed unaware of its existence even as documents from NSA whistleblower Edward Snowden produced more privacy scandals."
Posted by Unknown at 12:08 PM
Email ThisBlogThis!Share to TwitterShare to FacebookShare to Pinterest