(The 2009 diplomats ball at City Hall. The SF Chronicle's society reporter Catherine Bigelow snapped the photo and said: "Days before Protocol Chief Charlotte Shultz hosted her holiday party for members of the San Francisco Consular Corps and Host Committee, she wished for a bit of snow. [...] But Shultz was already prepared with some white magic: she’d decorated the lawn of City Hall with piles of the fresh, fluffy stuff with an assist from a snow-making machine. [...]  A snowman was built in Charlotte's snow on the lawn of City Hall." )

Who knew this simple question would not be answered with the assistant of the public employees at San Francisco's City Hill, in a few weeks' time: Who is paying for the Mayor Protocol Office and its two staffers Charlotte Shultz and Matthew Goudeau?

My public records request for the costs of the office's December party at City Hall for hundreds of diplomats and friends of the mayor, produced a reply from the mayor that said no responsive records were located. Here's what the Controller's Office when asked for the City's expenses of the party:

The Mayor’s Protocol Office is a privately funded activity, therefore the Controller has no expenditure information in the City’s financial system regarding this office. I understand that the Mayor’s Office has provided some information to you regarding this request. We have no records that are responsive to your request.

I've also requested the list of private funders to the office and amounts donated and Goudeau said:

In June 1998, voters approved Proposition F, prohibiting City funding of the Office of Protocol. The same proposition permits the Office of Protocol to continue to operate paid for by private donations and in accordance with the laws and practices as of October 17, 1989. June 1998’s Proposition F and all San Francisco voter information pamphlets from 1907 to the present are available free to the public on the San Francisco Public Library’s Ballot Propositions Database.

Glad he informed me about the private donations, but he didn't produce any info on them as requested. The mayor's sunshine staffer shared this reply in response to my request for the list of donors and 2013 calenders for Shultz and Goudeau:

This office does not have any responsive documents to your request. 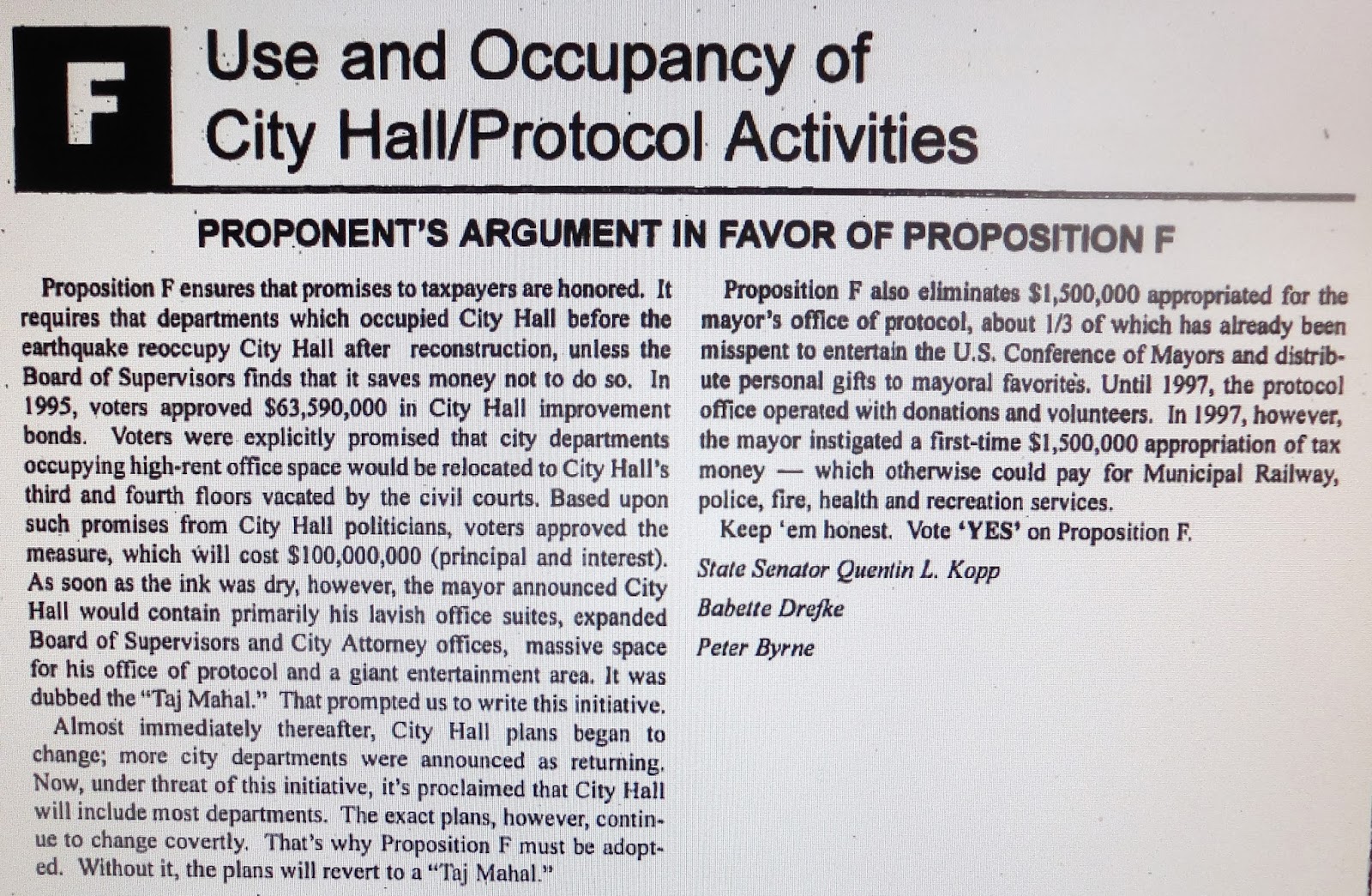 (From the June 1998 voters pamphlet from the Department of Elections.)

I read the language for 1998's ballot Prop F and learned that it prohibited hoity-toity parties at City Hall and the selling of the public space for entertainment purposes, something I was unaware of and I wonder how that got changed or subverted since we all know the lavish shindigs in the Rotunda and Ground Floor take place practically weekly.

Also news to me was that in 1997 Mayor Willie Brown allocated $1,500,000 for the Protocol Office, according to backers of Prop F. Says so in the voters pamphlet on page 93. I'd like to know what the current budget is but it's probably easier to learn who is a member of North Korea's Politburo than getting Ed Lee to be transparent about this office.

Sure do wish someone would explain to me how the Protocol Office, a very private endeavor, gets real estate and power at City Hall, and there is public email chain or paper trail.
Posted by Unknown at 3:12 PM
Email ThisBlogThis!Share to TwitterShare to FacebookShare to Pinterest