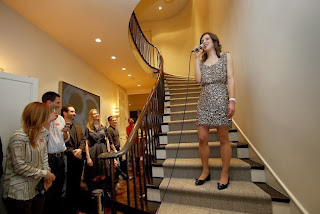 The front page of the business section of the the paper version of the San Francisco Chronicle on Friday contained a gushing and puffy story that could easily have been penned by Jessica Lessin's public relations team, if she has one. If she doesn't, well, she may not need such PR assistance when she can count on such glowing and soft "news" pieces.

I wonder what arrangements the paper made with Lessin in order to send a reporter, Nellie Bowles, and photographer to such a swellegant invitation-only Tech Inc launch party up in Pacific Heights. The last thing I bet Lessin and her buddies would want around would be a reporter ready with hard-hitting questions.

From the opening, the piece reeks of  privilege and the elite 1 percent, as a young person of means starts pricey Tech Inc reporting site called The Information:

Under a skylight that spanned the living room of the Broadway Street mansion, the 30-year-old Lessin wore gold sequins and seemed to glow in the appreciation of her considerable tech connections.

Gosh, so much gushing over her golden glow you know this Tech Inc butt-kissing of a high order. After two quotes from Lessin, we learn more about her privileged status, then one of a few favorable quotes about the Golden Girl:

Lessin grew up in Connecticut, the daughter of a consultant and investment banker, graduated from Harvard University on a Thursday and started as an intern at the Wall Street Journal on a Monday. She stayed there, covering Google, Yahoo, Twitter, Facebook and Apple.

"She's fiercely smart and an absolutely relentless journalist," said Wendy Pollack, a former news editor at the Wall Street Journal. "To be anything other than hard hitting would be unfathomable to her." 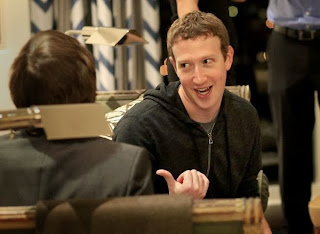 Wow, a WSJ colleague singing her praises! The Chronicle then prints more love for Lessin, this time from one of the writers working for her:

"She's very precocious. I mean, she's only a year younger but she doesn't act her age." Before meeting Lessin, Efrati was wary of how friendly she was with the captains of tech she covers. "When I first got to S.F., I had this assumption about her - 'Is she too close to the industry?' " [Amir] Efrati said. "But she is more ethical, more conservative and more careful than I am. It's a very weird line to walk, but I think she's able to separate work and friends."

If this were decent and balanced journalism, we would now read a counter-quote about Lessin but no critical or unfavorable comments appear. Not had your fill of adoration by the Chronicle for Lessin? Get a load of this:

Brian Singerman, a partner at the Founders Fund [said], "She'll call me up and say, 'I just want to let you know I'm gonna write this story.' She's one of the best and most trusted reporters out there. She's also a close personal friend. And I know how it works."

Putting the cherry on top of the icing on a beautiful cake, the Chronicle ends with a remark from Lessin that will surely endear her even further to her Tech Inc pals:

"Our message is we're here, like all the startups you guys birthed, and we want you guys to come along for the ride," she said, referring to her guests.

Something tells me that ride won't be happening on Muni or BART. To sum up this article, it was Lessin and elite pals said. Period. End. Of. Story. No opposing views allowed by Nellie Bowles and her business section editors at the Chronicle.

Last night, I tweeted some snark at Lessin, kvetching that her operation was not interested in stories about renter's and the poor dealing with the eviction epidemic, and to my surprise she replied:

@MichaelPetrelis @theinformation @amir @WSJ Hi Michael. We care about all good stories and certainly that one.
— Jessica Lessin (@Jessicalessin) December 15, 2013


OK, I give her credit for responding in the positive, but you know what? If her startup The Information does write about Tech Inc's impact on folks being displaced and other negative impacts the industry is having on changing San Francisco, I'll only be able to read the headline. A yearly subscription to The Information costs $399 or $39 per month. That's beyond my budget.

Posted by Unknown at 1:56 PM
Email ThisBlogThis!Share to TwitterShare to FacebookShare to Pinterest