To honor the giant humanitarian and South African hero Nelson Mandela, Kink.com is heeding President Obama's order to lower flags to celebrate the incredible life of Mandela and grieve over his passing.

In related news, the petition to Mayor Ed Lee requesting the LGBT Pride flag at Harvey Milk Plaza in the Castro on municipal property be lowered to show respect for Mandela and his freedom fighting struggles, hit 100-signatories today.

The rainbow flag at Milk Plaza continues to fly full-mast. The MUMC leaders and their City Hall enablers could teach the GOP a lesson in how to be the Party of NO. For those new to the almost three-year battle over control of the flagpole, Those who hold the key to the rainbow flag are more interested in displaying their hatred of me for advocating community-control of the flag than in honoring Mandela. 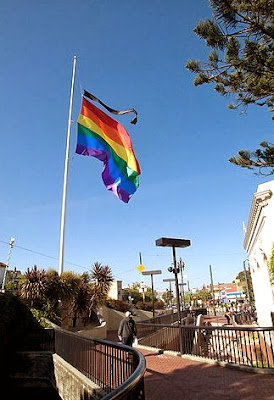 (On May 26, 2009, after the California Supreme Court upheld Prop 8, the Merchants of Upper Market Castro allowed the Pride flag to blow in the wind in a lowered position and with a black ribbon topping the flag. Credit: Brian Kusler.)

MUMC and City Hall leaders say now that the rainbow flag at Milk Plaza cannot be lowered because of Muni cables and I call bullshit. The LGBT and allied community can find a smaller flag if need be or the flag can be lowered almost-half-mast and a way found to lower the darn schmatta already.

Thanks to everyone pitching in to get the rainbow flag at Milk Plaza flying at half-mast. You can sign the petition here.
Posted by Unknown at 11:01 PM
Email ThisBlogThis!Share to TwitterShare to FacebookShare to Pinterest