MUMC: No to Flying
Trans Pride Flag on Remembrance Day


(MUMC changed the rainbow flag display on September 16 for more than a week because of the Folsom Street Fair. Credit: Bill Wilson.)

The latest twist over control and community use of the flag on public property in the heart of LGBT America is another illogical rejection from the Merchants of Upper Market Castro. You'll recall that MUMC in September rejected President Obama's proclamation to lower flags on 9-11 to half staff to honor the victims of that day, as reported by KGO-TV. MUMC said they hadn't enough time to consider the request from longtime local activist Bill Wilson.

So, in early September local black, trans, HIV positive senior and military veteran Veronika Fimbres submitted written and verbal requests to lower the rainbow flag in late November to honor all of the murdered and maimed transgender people around the world. It took MUMC a full-month to respond in writing. Let's unpack their reply, ghostwritten by non-merchant Richard Magary and signed by Cliff's Variety Store owner Terry Bennett who is the president of MUMC, to Veronika:

MUMC: The MUMC Board has thoroughly reviewed, discussed and considered the request, and we appreciate your patience while that was done. The request is not approved and there will be no change in the Rainbow Flag display on November 20.


(The flag flew at half mast the day after Prop 8 passed in November 2008. Note the absence of power cables in the vicinity of flag. Credit: Jamison Wieser.)

MUMC: [Our flag rules] strictly limit replacement or modified displays of the Rainbow Flag. The display you request does not fall within the established policy. We also have recently reviewed the Rainbow Flag policy regarding flag display at lowered or half-mast. We have determined that to do so would jeopardize public safety for pedestrians and passing vehicles, due in part to nearby overhead electric and other utility and transit service wires and to other conditions at the site.

When MUMC lowered the flag on September 11, 2011, for an appearance by Mayor Ed Lee and the 10th anniversary of the terrorist attack, and flew it at half mast for murdered gay Ugandan David Kato, local AIDS heroine Ruth Brinker, national gay icon Frank Kameny, Castro policewoman Jane Warner and policeman Jon Cook, public safety was not an issue.

There are no overhead wires near the flag, but that bit of reality doesn't stop MUMC from spinning a new excuse out of thin air.

BTW, those MUMC rules for public property were created by MUMC members at invitation-only meetings where only MUMC member were in attendance. There's been zero public input about these rules for the public flag and pole. So much for democracy in the Castro. 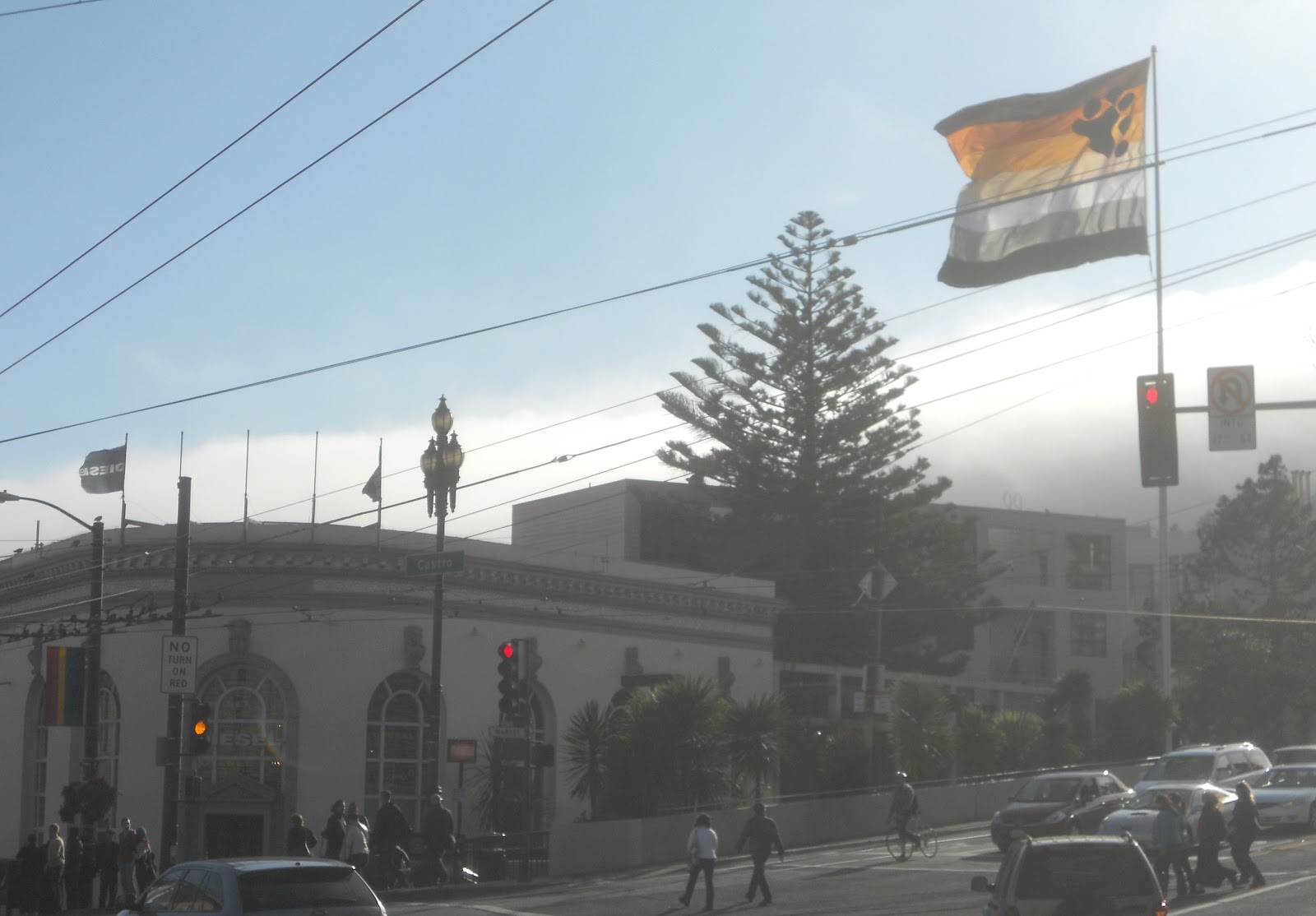 (In February, the Bear Pride flag flew for 3-4 days. The cables obscuring the flag are half a block away from the pole.)

MUMC: Nothing in this response to your request should be interpreted as any disrespect for the Transgender Flag, the November 20 Transgender Day of Remembrance, or similar issues. We hope that consistently administering MUMC's Rainbow Flag policy, in fact, re-enforces the strength, pride and unity of all parts of our community.

Please allow folks to make their own interpretations. Let's be clear about the false consistency of MUMC administering the public flag. They have one set of rules for their friends at select nonprofits, the leather and bear communities, and the rest of us. Why is it OK to raise the Leather Pride and Bear Pride flags for a few days, but not permissible to fly the Transgender Pride flag for one day?

The answer is separate and unequal administration by MUMC. 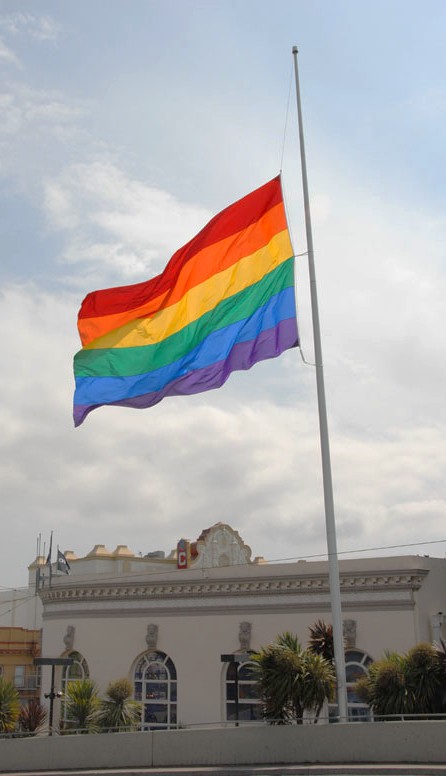 (Sept. 11, 2011, the flag was lowered and flew with no problems because there are no overhead cables.)

MUMC: Please also note that we have allowed you to attend the past two monthly MUMC Member Meetings (September 6 and October 4), although you did not make advance arrangements to do so, and your attending did not conform with our policies. MUMC is a private business and merchants organization. MUMC Meetings are private and open only to current Members and other pre-arranged guests.

We respectfully ask that you do not attend future private MUMC Meetings (unless requested and mutually agreed in advance), and that you and colleagues follow and respect our attendance policy published with Agendas.

Could they be any more hostile to public engagement about public property? Veronika's request was made shortly after September 6 and since she hadn't received a reply by October 4, she went to the meetings.

She is not only a respected member of the community but also a citizen journalist and attended wearing two hats on her lovely head, and she's treated like yesterday's trash by MUMC leader Terry Bennett. That is wrong.

Since these issues flared up in January 2011, MUMC and their City Hall patron Scott Wiener have refused any public meetings or dialogue to create a solution. That refusal will continue to be MUMC and Wiener's policy, which hugely dishonors the man for whom the plaza was so named, Harvey Milk. If Harvey were alive, he would not allow the flag controversy to go on for nearing two-years.

Let's close with a quote to BAR editor Cynthia Laird from former MUMC president Steve Adams in February when Laird first raised the question of flying the Transgender Pride Flag on November 20 for remembrance reasons: "I think it is a great idea and one I would support."
Posted by Unknown at 12:06 PM
Email ThisBlogThis!Share to TwitterShare to FacebookShare to Pinterest

Hi Michael! I always enjoy reading the posts on your BLOG. I learn so much from you! I'm sure you've provided the back story before, but for those of us that do not know, how exactly did it come to be that the MUMC controls the Pride flag? Why is the Pride flag in the hands of a private business organization rather than the City or a community entity?

check out this story for some basics about how MUMC came to control the flag:
http://blogs.sfweekly.com/thesnitch/2011/04/rainbow_flag.php

while MUMC produced bogus records in April 2011 supposedly granting them control, the department of public works has NO files showing they gave control to MUMC.

in short, a verbal agreement was reached about a decade ago, but there is nothing in writing ceding control of this important piece of public property to a private group.

Please create an action plan so that you can control the flag. You don't like MUMC doing it, so find a way to do it yourself.

Plans have been presented to MUMC and Castro leaders for community control of the flag, but MUMC refuses to meet with us. Scott Wiener thinks the status quo is fine. There are folks willing to take over control of the PUBLIC flag from MUMC, but until such time as MUMC gets democratic (small d), they will continue to divide the community.

"We also have recently reviewed the Rainbow Flag policy regarding flag display at lowered or half-mast. "

Unless Harvey Milk Plaza has been detached from Castro and floated out to sea, someone should let MUMC know the flag would fly at half-STAFF. A mast is found on a ship.