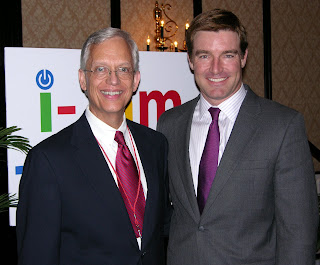 (Ernie Allen, left, and KY Attorney General Jack Conway.)
According to a startling story today in the St. Petersburg Times, the director of a leading missing children org is raking in a hefty salary, nicely north of $1 million. As longtime readers know, I believe Gay Inc and AIDS Inc orgs have over-paid the top executives and assistants, but I can safely say none of those executives have crossed the million-dollar threshold.

There really isn't enough scrutiny of the nonprofit groups and their stewardship of both public and private dollars raised for charitable work, so let's offer a hearty round of cheers to reporter Susan Taylor Martin for her excellent work. She did what many more reporters and bloggers need to do more of: comb IRS 990 filings and look at an org's salaries.

I encourage everyone to regularly check the GuideStar.org site, where IRS 990 reports are available for free, and follow the nonprofit money.

In many ways, the National­ Center for Missing and Exploited Children is a quasi-government agency.

Mandated by Congress, the center has access to the FBI's missing, wanted and unidentified persons files. It operates tip lines for the Justice Department and Immigration and Customs Enforcement. It gets more than half of its money from U.S. taxpayers.

Yet the Virginia-based center, with regional offices in Florida and three other states, is a private nonprofit organization exempt from federal salary caps. And that has enabled the center's president, Ernie Allen, to command a salary among the highest in the nonprofit world.

That's some chunk of "nonprofit" change. To view the center's IRS 990, click here, then read page 7 of the filing.

On top of breaking the news about Allen's excessive salary and total compensation, reporter Martin also delved into an effort to subject this nonprofit to the FOIA statutes. FYI, I am very supportive of applying FOIA laws to nonprofits receiving federal dollars. Federal sunshine should follow federal dollars. More from the story:

Unlike the FBI and Department of Homeland Security, the center is exempt from the Freedom of Information Act. But it should be subject to it because of its quasi-governmental status, contends a medical researcher who was labeled an "abductor'' on the center's Web site in 2005, after he left the United States with his daughter. [...]

"If the center is going to continue playing the role it does today, there's not a question in my mind that it should be subject to accountability and transparency through the FOIA process," says Berin Szoka of the Progress and Freedom Foundation in Washington.

Though this article is not specifically about anything gay or AIDS related, our communities should pay attention to it, because we could learn a few lessons about compensation and fiscal stewardship of our institutions, starting with asking if our executives are making too money.
Posted by Unknown at 3:55 PM
Email ThisBlogThis!Share to TwitterShare to FacebookShare to Pinterest

This is very interesting information about E Allen's salary. The culture in this organization is very law enforcement oriented and they even do performance reviews that include if managers are "discriminatory".

The 'law enforcement culture' comment is very true in the sense that only sheriffs, and attorneys are given hikes and promotions, not your average Joe.

The National Center for Missing and Exploited Children (NCMEC) is a fake organization operating in making its rich directors more richer. This is one not-for-profit organization that hires more directors and exec directors than analysts who can actually help in finding the missing kids. CEO Ernie Allen makes 1.3 million US dollars in salary PLUS compensation and benefits. US Congress picks up their bills and yet they are pretentious beggars using the guise of missing children to make more money. The hard truth is, the more media frenzy a missing kid's case gets, the more money goes into Ernie's and his co's pockets. DON'T BE FOOLED.

It is interesting that Allen is from south Louisvlle and attended DuPont Manual High School from 7th to 12th grade where he was a high achiever, being president of student council, drum major of band, and much else. Sen Mitch McConnell is from south Louisvlle and attended the same high school preceding Allen by just a few years, and was also president of student council, etc.. It is not inconceivable that McConnell has been a mentor to both Allen and the organization.

I neglected to add that Allen also followed McConnell through the University of Louisville and UL Law School.