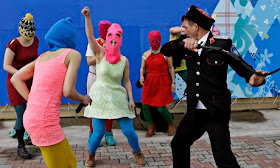 The St. Petersburg Philharmonic, under the direction of conductor Yuri Temirkanov, will be performing in San Francisco on March 3and members of Gays Without Borders are organizing a solidarity vigil outside Davies Hall where they will be performing. Please mark your calendar for this important event:

WHAT: Speak out and raising of a 6'x10' rainbow flag

WHY: Protest before the St. Petersburg Philharmonic concert 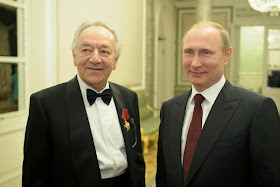 Conductor Temirkanov was one of the Putin 500 Trustees, a group of prominent Russians who endorsed Vladimir Putin's 2012 reelection bid. On December 14, 2013, he was honored at a gala concert and 75th birthday party by Putin in St. Petersburg, according to the Kremlin's Presidential Press and Information Service which also circulated photos from the ceremonies.

Temirkanov and the visit by the government-funded St. Petersburg Philharmonic are the perfect cultural figure and musical performance to communicate a message to Putin and all of Russia: We refuse to be silent as our brothers and sisters are denied free speech, the right to publicly assemble and full protection of their universal human rights.

Pussy Riot's new video titled "Putin, We Will Teach You How to Love the Motherland", was released today and should be viewed by anyone concerned with human rights.We believe March 3's vigil is the first post-Sochi action in support of lesbian, gay, bisexual and transgender Russians, and the feminist rock group and social justice advocates of Pussy Riot. 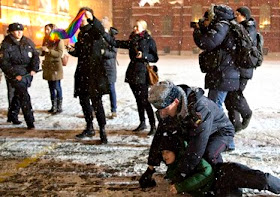 (Gay activists being denied their right to assemble in Moscow's Red Square, before the start of the Olympics. Credit: Reuters.)

After months of escalating violence and stigmatization of LGBT people in Russia, and the beating of Pussy Riot performers during the Olympics, it is crucial that we use cultural visits to send a message of hope and tolerance.

A call has gone out to Bay Area supporters of the incredibly brave Pussy Riot performers, to join the March 3 action wearing the group's famous costume of a solid, brightly colored knit ski mask and blouse or dress. A limited number of such masks will be available at the solidarity vigil. 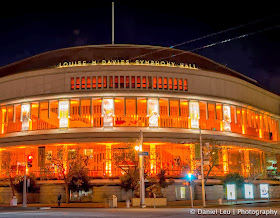 The San Francisco War Memorial and Performing Arts Center, which is a City government agency that oversees Davies Hall because it is a publicly-owned building, last week rejected a request from Gays Without Borders to fly a rainbow flag on the hall's flagpole. We are appealing that decision and have also requested that the atrium lights of the hall be lit up with rainbow colors.

If the City can illuminate the hall in the color of a privately-owned professional sports team, we think the hall can use the rainbow lights presently lighting up City Hall during the Sochi Olympics in support of gay Russians to light Davies Hall for one night.

Please join us on Monday, March 3 at 7 pm at Davies Hall and show your strong solidarity with Pussy Riot and LGBT people of Russia!
Unknown at 1:32 PM
Share