(More than 50 socialists and gays demonstrated near the Pushkin monument for global women's rights and protections on Tuesday. Credit: Socialist World.)
One of the best things to come out of the controversies with Nikolai Alekseev in recent weeks has been connecting to other gay Russians, who are educating me more about the diverse forms of gay activism and visibility that are taking place in Moscow and St. Petersburg, without harassment from the police or bystanders and in coalition with straight allies.

Let's look at some of the news my Russian contacts are sharing, starting with a peaceful, colorful and well-attended rally on March 8 in Moscow for International Women's Day that Slava Revin brought to my attention. Excerpted from the Anti Dogma site operated by Ruslan Porshne, via Socialist World:


In addition, in the preparation of the action, we asked for support to LGBT activists, and they have responded to our appeal: the Pushkin monument rose and rainbow flags.

Originally LGBT activists to act had not planned: degree of homophobia in Russia is high. LGBT and not to any audience willing to speak openly. In addition,, had not been extensive discussions on the connection between sexism and homophobia  that would have shown the need for solidarity of feminist and LGBT movements. In a sense, We have asked the LGBT activists support in advance: a joint discussion will be held only on April 3 during  ""Week Against Homophobia."

Here, at the meeting, first tried to explain activist KRI: patriarchal morality implies a clear division into two gender roles: masculine (Strong, active and intelligent man) and feminine (Weak, passive, prunes woman). Gay men are perceived as male, voluntarily "Drooping" to the female role - accordingly, many of them attributed to other qualities, supposedly inherent in the nature of woman: tearfulness, pliability, dependence.

Therefore, we believe that it is impossible to speak out against sexism, and homophobic prejudices at the same time to cultivate (and vice versa).  After we made the LGBT activist Julia - and said, how important it is to be able to talk openly about the discrimination faced by LGBT and deal with these insults and humiliation.

(The crowd listens to a speaker, under a billboard for BMW on the left and the poet Alexander Pushkin's statue casting his gaze on the event. Credit: Socialist World.)
Slava also shared a video with me of a brief, but very visible march on May 31, 2010, on fancy Arbat Street in central Moscow that was not related to an earlier attempt that month by Nikolai and 20 supporters, almost half from outside Russia, that received much attention on Western gay blogs. Look at this short clip. The visuals tell the story:

From Ruslan came this message in response to my query about this week's Moscow rally and other street actions, with straight allies of many stripes including the heroic and courage Memorial Human Rights Center including gay people in their actions and education efforts:


In St-Petersburg there is annual "March against Hate" every October which brings together human rights activists of all kinds. Guess what? LGBT activists openly participate there with rainbow flags!!! And the organizing commitee of this march and local authorities are well aware of them. This is not a secret participation. No need to run, no need to hide, no need to scream of terrible discrimination and harrasment.

This is what I'm talking about all the time. Alexeyve's gay pride campaign is a fake struggle for god knows what and god knows why.

Below are pix from Ruslan's reports and certainly show the large numbers of folks who showed up for some of the annual marches in St. Petersburg, with enormous rainbow flags fluttering in the cold wind:

(This was the 2009 march. Notice under the small red flag in the center, a dark blue banner with the MEM of Memorial visible. Good to see coalition-building and street activism taking place between the human rights and gay communities.) 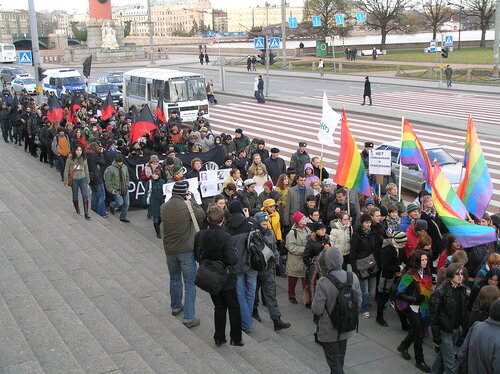 (Another big turnout for the 2010 march in St. Petersburg.)
Many thanks to my new Russian gay pals for opening my eyes to more of their community and educating me as to how bridges are being built by gays to political parties and advocacy groups.
Posted by Unknown at 11:31 PM
Email ThisBlogThis!Share to TwitterShare to FacebookShare to Pinterest