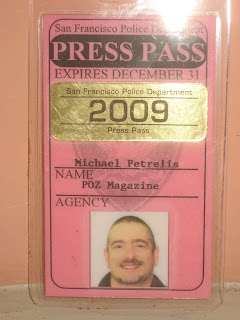 SF Police Have Granted Me a Press Pass
A little over a week ago, I received a press pass from the San Francisco Police Department, after publicly complaining I had been denied one because of the department's strict criteria regarding who qualifies as media. This is certainly a step forward, but I have to point out that the pass was not issued to me as a blogger, which was my original request to the police.

The pink plasticized pass, which is valid till the end of the year, and is signed on the back by the chief of the department, George Gascon. The news agency line reads "POZ Magazine." How did this happen? In reviewing my appeal, the cops asked for any articles of mine that appeared in more traditional media, so I sent them columns I'd written for POZ, and for some reason that is the outlet the cops chose as my agency.

When I renew the pass in December, I will ask for one that identifies my outlet as this blog. Getting the pass generated some local press. Here's how the SF Examiner covered my efforts over this:

Blogger Michael Petrelis applied the first time in July after he couldn’t get into the press box at a news conference inside the federal building. He was denied the pass under former police Chief Heather Fong because he didn’t cover crime scenes -- although press passes are regularly checked at busy hearings at City Hall and other government buildings.

But under media savvy police Chief George Gascón, more attention will be paid to the new media and those who don’t necessarily cross police lines. [...]

Back in September, the public affairs office informed me the rules for press passes was being revamped, at the direction of Gascon, and many suggestions were made by bloggers and reporters to the department to improve the process.

Supervisor Bevan Dufty, who had lobbied Gascon on my behalf, is helping the department issue passes to others who need them, and also modernize the criteria for passes. Many thanks to Bevan and his staff for the work on this matter.

The Society of Professional Journalists is also very interested in this issue and last week I attended a meeting with the local chapter, to discuss ways to meet the needs of mainstream reporters and new media types, and to address changing total control of local press ID cards with the police department.

In other positive changes at the police public affairs desk, the SF Chronicle notes:

We knew Castro Halloween was dead, but official word today from the San Francisco Police Department puts the final, um, nail in the coffin. Here's what the department (whose public affairs office now actually puts out press advisories!) has to say:

There will be no City-sponsored venue in the Castro district for Halloween, Saturday, October 31. There will be no official entertainment provided and no street closures are planned. [...] (Emphasis added.)

Believe it or not, and lots of reporters, bloggers and police watchdogs know it to be true, progressive San Francisco for years had to endure the police department's public affairs office treating basic info like the gold in Fort Knox. Their top commitment was to keep it from the press and public, and to treat anyone asking for details like a criminal suspect.

Thanks to Chief Gascon, who in his short time leading the police force, has heard the many complaints about the press office, and he's acted swiftly and responsibly to rectify problems. I'm looking forward to further improvements with that division of the SFPD, and smart suggestions coming from SPJ, bloggers and Dufty's office.
Posted by Unknown at 3:00 PM
Email ThisBlogThis!Share to TwitterShare to FacebookShare to Pinterest

Congratulations, this one's been a long time coming!