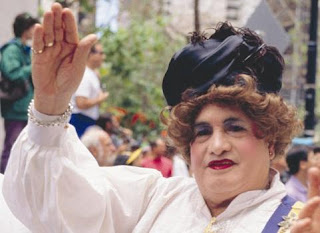 (Jose Sarria, gay rights leader, drag queen and death penalty advocate.)
Let me state at the outset that I am opposed to the death penalty, and that I read this story in today's SF Chronicle because the headline mentioned the death sentence in a San Francisco case being upheld, a case with quite a few gay angles.

I believe stopping capital punishment is a gay and a human rights issue, both here at home and abroad. Nothing would please me more than to see gay political groups stand against the death penalty and work toward its abolition in America, and around the world.

Here's what Bob Egelko, the Chronicle's court reporter, wrote for the paper about the decision handed down two days ago, and many of the gay aspects:

The state Supreme Court has upheld a San Francisco man's death sentence for robbing and stabbing a man he picked up in a Castro neighborhood bar in 1986, rejecting a defense claim that a juror concealed personal ties to the case because he wanted the defendant executed.

Clifford Bolden, 56, is the only San Franciscan among 680 prisoners condemned to death in California. ...

Bolden was convicted of murdering Henry Michael Pedersen, 46, who was found dead in the bathtub of his Corbett Avenue apartment in September 1986. ...

Prosecution witnesses said Bolden had met Pedersen at the Pendulum bar on 18th Street the day of the murder. ...

The state Supreme Court agreed in 2005 to consider defense claims of misconduct by one of the jurors, Jose Sarria, a San Francisco gay-rights activist who performed as a female impersonator at a local club. ...

Superior Court Judge Mary Morgan, who presided over the hearing, said she found Sarria more credible than the jurors who contradicted him. ...

Based on this excerpt, I get the sense that juror and drag queen legend Jose Sarria, alias The Widow Norton, and I are in opposite camps on the death penalty, and that he's very supportive of state-sanctioned executions:

In her declaration, Juror Charlia S. stated: “[Jose S.]’s behavior in deliberations was consistent with the determination he showed before deliberations began. He would not listen. He just kept pushing until all the votes were there for death.”

The trial jury foreperson, John C., testified at the hearing that he did not recall juror Jose S. saying he would never change his vote. On the issue of penalty, all the jurors deliberated and expressed their views. Juror Kathleen K., testifying at the hearing, did not remember anything unusual about Jose S.’s participation in the penalty deliberations.

Juror Andrew N. testified that during penalty deliberations Juror Jose S. announced: “ ‘I am not going to let you guys just get out of here because of—because you want to go home.’ ” He did not recall Jose S. saying he would not change his vote, but Jose S. did say he would not change his vote “ ‘just because ya’ll want to go home.’ ” According to his recollection, Jose S. talked a lot during deliberations, listened to the other jurors, and argued in favor of the death penalty.

Juror Thomas S. testified that at the start of penalty deliberations Juror Jose S. announced he would only go for the death penalty. In his opinion, Jose S. did not deliberate but merely stuck to his position; Jose S. seemed to be completely inflexible. He testified that Jose S. did not explain the basis for his position on the penalty issue. Thomas S. testified that he had originally voted for life imprisonment without possibility of parole and that he regretted changing his vote.

Posted by Unknown at 3:38 PM
Email ThisBlogThis!Share to TwitterShare to FacebookShare to Pinterest