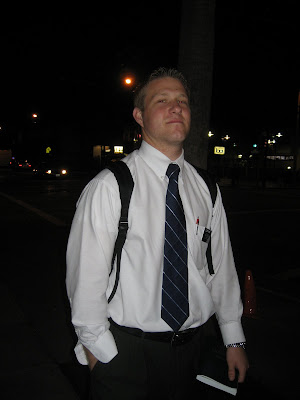 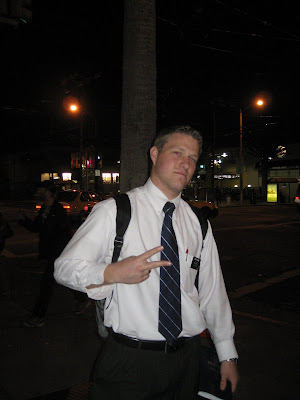 I Tried Recruiting This Straight Mormon into the Gay Lifestyle
This young straight Mormon man from Utah, was at the bus stop at Mission and 16th last night as I waited for the bus to arrive and take me to the Castro Theatre for a showing of Antonioni's "La Notte." His name is Elder Adams; says so on his name plate on his crisp white shirt. Kind of wet behind the ears to be an elder, I'd say.

Click on the pix to enlarge them, and you'll see Elder Adams is holding a bible in his left hand.

He was out recruiting anyone at the corner for the Mormon Church and lifestyle, and as is my fun habit at times when running into the male Mormon recruiters in San Francisco, I turn the tables, introduce myself with this line, "Hi, I'm Michael, and I'm recruiting for the gay lifestyle. Can I sign you up, young man?"

Every time I've done this, the boys have been as friendly as can be and always willing to share a few words with me. They are trained in missionary school to strike up pleasant conversations with a range of people, so why shouldn't I engage them in friendly banter about diverse lifestyles?
If you're into this sort of eye candy and want to know more about Elder Adams, who said he wrestled in high school, you'll find him probably talking up his beliefs on Mission Street. He's quite fluent in Spanish and was happy to be sent here, so he can use his language skills.

At the end of our little conversation, I hadn't succeeded in recruiting this guy for the gay lifestyle, and neither had he signed me up in his missionary zeal for his religion, but if I don't recruit for my community, who will?
Posted by Unknown at 2:29 PM
Email ThisBlogThis!Share to TwitterShare to FacebookShare to Pinterest
Labels: gays, mormons, recruitment

i love you michael!

sorry to tell you this - no recruitment needed